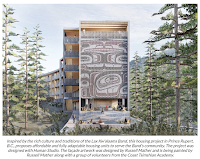 The eye catching design of the proposed Lax Kw'alaams Apartment complex for 11th Avenue east is just one of a portfolio of projects that have gained Michael Green Architecture the 2021 Architectural Firm Award as announced in Canadian Architect this past week.

The firm which worked with the Human Studio on the Lax Kw'alaams housing concept is featured in the current edition of the Canadian publication.

The project proposed for 11th Avenue East on the city's east side still awaits is public hearing in Prince Rupert, the concept design for it was among a number of the company's works noted in this article.

The focus for some of the impressive projects is the use of wood in the design of developments, with Michael Green Architecture often saluted for their creative approach to the signature feature for British Columbia architecture.

As the Canadian Architecture piece notes the British Columbia firm has a strong passion for the use of wood, so much so, that Michael Green has hosted a TED talk in the past on the vision of building wooden Skyscrapers.

The Prince Rupert project has stirred up some controversy related to the current location under consideration, most recently the topic was featured at Prince Rupert City Council's Committee of the Whole last week.

And while some of the area residents may be suggesting that the much needed housing proposal is in the wrong location, there certainly won't be many that won't take note of its stunning design.

With more than a few perhaps to wonder if an impressive and clearly vital housing resource such as this may have a future in a more central location of the city.

One where it could be the key showcase towards Council's desires for a shifting focus towards more housing in the downtown area.More on housing on the Northwest can be reviewed here.