The executive who has steered CN Rai through some incredible expansion while facing some challenges along the way will be stepping down from his duties in January.

CN Rail announced yesterday that Jean-Jacques Ruest will retire as President and Chief Executive officer of the continental railway in January (or until a successor is name) bringing over 25 years of service to the railroad to a close.

“On behalf of the Board, I would like to thank JJ for his dedicated service to CN over 25 years and as CEO since 2018. He has provided the company and all of our stakeholders with strong and inspired leadership.

JJ deferred discussions on his retirement plans in order to see the Company through the potential merger with KCS and closing of the transaction, and the introduction of the strategic plan announced on September 17th, 2021, which is beginning to demonstrate results.

We are grateful for his leadership and his exemplary commitment of service to the Company and wish him all the best in his upcoming retirement.” -- Robert Pace, Chair of CN’s Board of Directors

Mr. Ruest took on his duties in march of 2018, facing a list of challenges to improve the reliability of service for a range of stakeholders across Canada and in the USA. 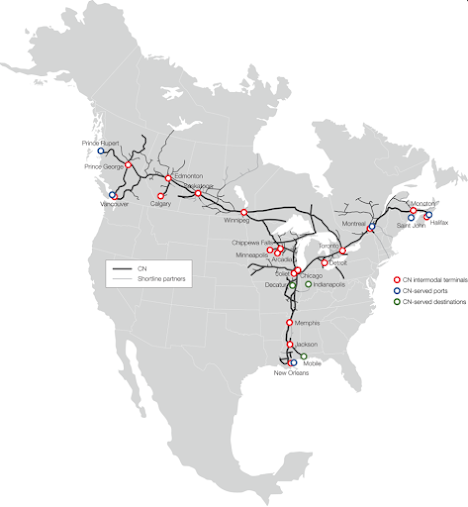 CN Rail has expanded its footprint in may directions under the CN President and CEO's time in office, from mergers and merger attempts with large American railways, to creating new terminals and transportation hubs both in Canada and the United States.

Among the largest of those footprints has been that found in Prince Rupert, which has seen a significant increase in rail traffic over the last decade with the opening of the DP World Container Terminal and the new terminals on the north Coast such as those for AltaGas, Pembina and Pinnacle.

That along with the ongoing service for RTI and Prince Rupert Grain has made the North Coast an important place mark on the CN map.

Along the way, CN has made significant investment in its facilities in Prince Rupert and along the Northern line through Prince George as traffic volumes increased and the opportunities of global trade arrived in the northwest.

In addition to the increased service has come employment opportunities for many residents of Prince Rupert and the entire Northern region of CN's service.

The expansion has however also been one which has seen the railway facing charges and paying heavy fines related to environmental issues in recent years, along with hearing other areas of concern from those communities the trains roll through on a daily basis.

The railway also faces labour issues through his term with work stoppages and concerns over safety at tines making for headlines across the nation.

The CN CEO outlined some of his thoughts on his time at the helm as part of the Tuesday announcement.

“I have been honored to lead CN during my time as chief executive officer, and I am confident that the Company is well positioned to continue to thrive following my retirement. The strength of the Company’s management team and Board allow me to announce my planned retirement knowing that the Company we have built will continue to prosper.” -- JJ Ruest, President and Chief Executive Officer

Towards the selection of the next President and CEO, CN has announced that a Search committee has been organized to conduct a global search to fill the position.

You can track some of the work of the soon to depart CEO and President from our CN Rail archive page.