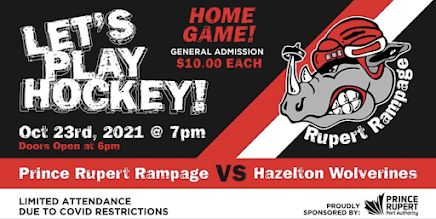 With a home season debut of last week that didn't bring a W for the ledger, the Prince Rupert Rampage will regroup for this weekend, with the Hazelton Wolverines in town for a Saturday night showdown with the Rhinos.

The Wolverines themselves will be looking to break the win side of the Standings, having dropped a 4-2 decision to the Nechako North Stars last Saturday night.

A game that offers up a hint that the Wolverines aren't shy when it comes to the physical play and post whistle incidentals, with Wolverine players amassing 15 minutes of penalties on six infractions last weekend.

Fans in the Jim tomorrow night will be hoping that the Rampage can recapture some of their home ice scoring prowess, the home opener one which saw the Prince Rupert side find the back of the net on only three occasions.

The lineups for both teams make for a look at two teams with much the same output after one week in the books for the CIHL season. 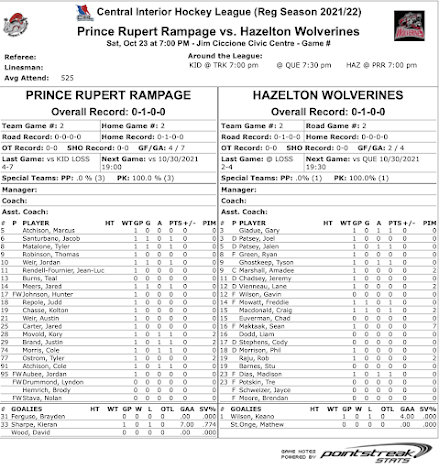 With tomorrow's home game comes another chance for Rampage fans to help lend a hand to a local community group, with the Rampage's Corporate Sponsor the Prince Rupert Port Authority hosting their donation station inside the Jim Ciccone Civic Centre.

Game time Saturday is 7PM, fans are reminded that with current gathering restrictions in place, seating is limited, you can learn how to pick up tickets and explore more pregame themes from the Rampage Facebook page.

More items of note on the Rampage and the CIHL can be explored here.