Community paramedic Jessica Friesen spoke for the pair of Emergency Responders providing for a detailed look at the challenges of their work.

Particularly when it comes to finding addresses in the city, noting of the many unusual breaks in the continuity of the city's streets and the lack of visual numbering large enough to be spotted by those responding to calls in the city.

Towards that they proposed a new bylaw, one that they noted should have as little financial impact on residents.
"We would like to request for a bylaw to be put in place in the City of Prince Rupert and for the city to implement a plan in order for the citizens to be able to follow this bylaw with as little financial impact as possible, where feasible. And for he money to be directed back into the community"
What they would like to see for all homes is to have a standard size requirement of at least 4 inches minimum, with height requirement of at least half an inch as well as to have no obstructions for those looking for them from the street.

They noted of some of the high turnover rate for the Ambulance and Police personnel in the community and then offered up some samples of houses that have little to no numbering, or are located below the street surface with no indication as to the number.
All of which Ms. Friesen observed can lead to slower response times.
"From personnel experience it's not uncommon to turn around or request a call back from our dispatcher clarifying an address at least once a day if not more ... this can increase response time from anywhere from two to ten minutes ... I believe that members of the community all around town, from east side or the west side rich or poor no matter what their status need to believe that when they call 911 we will make our best response time, when it matters most to them" 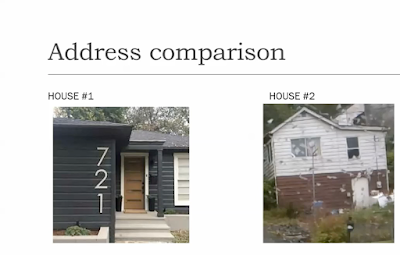 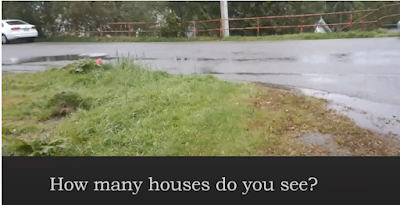 The presentation observed as to how the community is served by fifteen paramedics, twenty firefighters and over 40 members of the RCMP for whom the requested change would help reduce the response time for emergency calls.
"Paramedics and RCMP especially have a high turnaround rate in the city making learning the city and finding houses very difficult, many have voiced their concerns on which I have heard  and I am now bringing upon myself  to bring to the City's attention. Asking that this be another step the city takes  in moving forward for the safety of Emergency personnel and the city that we strive to serve" -- BC Ambulance Paramedic Jessica Friesen
From their review of the community they found that 85 precent of the areas studied in Prince Rupert had deficiency rates above 20 percent which means that one in five homes could not be identified in an emergency, a number  that gets worse during the night time with only 11 percent of the homes readily identifiable, which was noted poses a serious issue for emergency responders.
Towards creating the new signage, the presentation included some notes on how the City could work with a community group, such as the Rotary Club which is looking to become involved in the initiative, the plan one to incentivize the program to benefit the community as a whole.
The two emergency responders also noted how the hope is that the City will purchase the signs towards implementation of the program at not cost, eliminating any impact on residents while also giving back to the community by way of the Rotary Club.
The Council members for the most part agreed with the review of the situation, with Councillors Adey and Skelton-Morven offering comments in support of their project.
The Mayor also observed as to how it all makes sense, with Mr. Brain suggesting that they contact city staff to work out the details towards creating the bylaw request.
The Bylaw request will be brought forward at a future meeting.
You can review the full presentation from the City's Video Archive, the overview of the challenges facing Emergency responders opens up the Monday night session.
For more notes from Monday's Council Session see our Council Timeline feature here.
More notes on the work of Emergency Responders can be reviewed from our archive here.
Posted by . at 1:00 PM