The list of names seeking the leadership of the BC Liberal Party will remain at six for now, with Officials from the Party today denying an application from Aaron Gunn to participate in the leadership contest.

The move to refuse his application comes after what the BC Liberals say was a thorough review of the would be candidates statements on social media, as well as from their correspondences with him relates to his views on a range of topics.

The party stating that "Mr. Gunn's candidacy would be inconsistent with the BC Liberal Party's commitment to reconciliation, diversity and acceptance of all British Columbians"

It was a decision not received well by the would be candidate, who has been using his social media feed through the afternoon to relay his disappointment in their decision and observing that the fight is not over.

He had already begun to run a campaign anyways without endorsement by the Liberal hierarchy earlier this month announcing his plans in September and subsequently publishing what he called his common sense plan for British Columbia.

Though for many in the party some of the elements of the plan and his communication through Social Media raised a number of red flags.

His potential candidacy had also made for some political fodder for the governing NDP, which often made note of some of his social media themes, taking note of his rhetoric.

In his stream of twitter missives so far since hearing word of the leadership run denial, is a note where he points to some irony as he sees it,  in the reasoning of the BC Liberals. 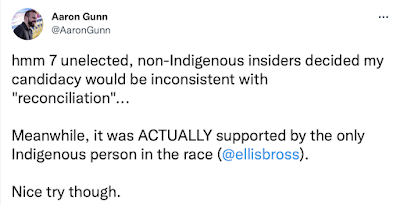 The tweet from twitter a reference to the comments from Skeena MLA Ellis Ross, he posted a letter last week that encouraged the approval of the candidate noting of the need to welcome candidates from a wide political spectrum.

Mr. Ross has since provided for his own statement.

The Skeena MLA expressing his disappointment at the BC Liberals decision Mr. Ross observing that whether he should or should not have been leader should have been the decision of the voting members of BC Liberal party.

What steps Mr. Gunn plans to take towards todays announcement, haven't been put forward yet, though when they are, it's likely the followers of his twitter feed and Facebook page will be the first to know.

More notes on the BC Liberal leadership campaign can be explored here.