Premier John Horgan has received guidance from his doctor that will see him face surgery on Friday, with the Premier making the announcement today, naming Mike Farnworth as Deputy Prime Minister and tasked with overseeing the government agenda during the period of surgery and recovery.

In his health advisory. the Premier recounts how he had noticed a lump in his neck and went to see his doctor for a range of tests and to discuss his concerns.

His notes were relayed through his Social Media accounts and end with a reminder for British Columbians to to see their physician or urgent care facility should they feel something isn't quite right in their own health. 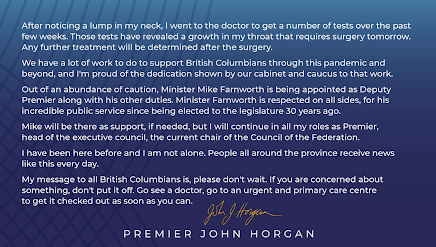 The Premier also noted that while Mr, Farnworth adds to his duties, that he will be there in support, continuing in his role as Premier, head of the executive council and the current chair of the Council of Federation.

Another update no doubt will come following tomorrow's surgery as to what form of a timeline for recovery that the Premier will be facing. 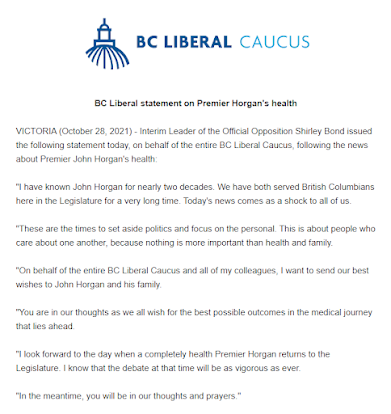 For more notes on the Legislature see our archive page here.