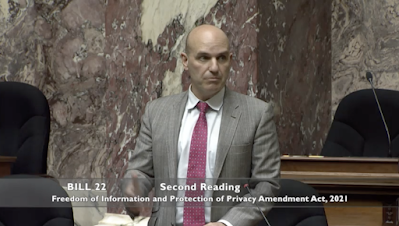 The British Columbia government found itself on the defensive for much of Tuesday, as the discussion on proposed changes to the Freedom of Information Act dominated much of the Legislature time in both the morning and afternoon session.

Citizens' Services Minister Lisa Beare must have felt somewhat like a swimmer in a Jaws movie, as the Liberals one after another joined into the discussion through Tuesday, challenging the Minister and the government on a range of areas of concern over their FOI plans.

Among those who spoke to the NDP government's narratives and raised some alarms when it comes to the legislation were interim Liberal leader Shirley Bond, former Liberal cabinet minister Todd Stone and former leader Andrew Wilkinson.

Minister Beare however was not alone on the day, there were reinforcements from the government side ready to lend a hand in defending the governments plans and among them were NDP MLA Nathan Cullen, with the Stikine member providing for a near thirty minute response to Liberal charges of the last 24 hours.

Some of the key elements from his presentation can be reviewed below:

It's a pleasure to join the conversation today about what I think we can all agree is an incredibly important topic — about how information is shared or not shared with the British Columbia public. And as somebody who also represents a northern riding, in Stikine, I am also thinking about the issues that we face up north — where, from time to time, citizens, citizen activist groups and local media seek to find out what is happening within government and will use this particular act in order to pull that information from government if it's not proactively disclosed.

I think that's an important point to raise: that we should look over the trend line of our government — being now in power now some four years — to see if that trend has improved in and of itself. Are more parts of the British Columbia government automatically disclosing information to the public?

Well, my friends across the way are certainly entitled to their opinions but not to their own facts. If the number of institutions are increasing — which they are, according to the commissioner and others — that are automatically disclosing their reports, are automatically disclosing information, that isn't appropriate, because we all know that there are limitations for disclosure and that there's also an expectation and a tension between privacy and disclosure.

Towards the bill, Mr. Cullen noted of the importance of moving forward with it and how information accessed from government sources is used.

This bill, Bill 22, B.C.'s Freedom of Information and Protection of Privacy Act, seeks to bring British Columbia forward in many important ways because, as members in the opposition and those on the government side have indicated, we've lagged a bit behind in terms of other jurisdictions within Canada, and in the way that we administer this act and the requests that come forward.

Now I spent more than a fair share of my time in opposition. We would, from time to time, use freedom-of-information to try to get out information from government. It was sometimes successful. It was oftentimes thwarted by heavily redacted or government just taking so long that, by the time the information came forward, it was no longer useful. The issue had moved on.

We've also seen, as opposition members here have talked about today, the great effectiveness that the fifth estate, the media, are able to use freedom-of-information — the power to draw from government more information than was initially disclosed, to be able to talk to the public about the administration and how the government is doing.

I'm in full agreement with the opposition of the vital nature of freedom of information, particularly for the media — we'll focus on there for a moment — in terms of their efforts do their job on behalf of the public, because they have an incredibly important role to play in the public discourse, in keeping government accountable and making sure that the extraordinary powers that government has in its hands are handled responsibly.

Through the course of his remarks, the Stikine MLA outlined how important that access to Freedom of Information Act is, noting of recent high profile topics as the ICBC issues of the past and other areas in recent news reports where using FOI served to explore those themes more expansively.

Mr. Cullen also took to the topic towards what has been described by the NDP government as the modest fee being considered for the Access to information, using that to reflect on areas he suggested that the Liberal opposition as a group weren't so concerned about fees.

I've noted that some of the reports on Twitter which my Liberal friends are now using as sole-source information, are suggesting that places like Quebec don't have a fee at all, and in Ontario. There are sliding fees.

There is an initial administration fee in many jurisdictions — $5, $10, $20, up to $25 — to suss out how extensive the request is. Are you asking for a single document? Are you asking for ten years' worth of documents and tens of thousands of pages? What is it that you're seeking?

And I think a $25 fee — up to and around that range, or as little as $5 — seems worthwhile in the sense that, we sometimes show the earnestness of requests connected to the fact of: will you put 5 bucks down? If someone is unwilling to pay $5, then are they sincere in their efforts?

And our government is absolutely concerned and consumed with issues of equity and questions of social justice. I think we're in the $5 to $25 range over something like this. We're in what I would consider a reasonable range, and certainly reasonable with many other jurisdictions within Canada, the U.S. and around the world.

They certainly weren't concerned about fees when MSP premiums were cranking up for every British Columbian family, when they were expressing and exposing British Columbians to more and more tolls.

Suddenly they're concerned about the $5 to $25 fee.

Understand, consistency is not something that we're necessarily looking for from this opposition. That's okay. Let's find the places where we do have agreement, because I think that's important. It is vitally important, and the opposition plays this role, as do the press, as does civil society, in the role and that tension of accountability within government.

You can review all of the day's contributions from the Legislature Hansard page as well as the Video Feed from Tuesday, Mr. Cullen's commentary to the topic can be found starting at the 4:20 PM mark of the Tuesday afternoon session.

While he had no speaking role to make use of as part of Tuesday's session, Skeena Liberal MLA Ellis Ross did have a few thoughts to share on the NDP government's plans related to access to information.

Mr. Ross used his Facebook page for a video commentary on the topic on Tuesday afternoon.

Mr. Ross also used his twitter feed to share his talking points on the issue, including a vow that should he become leader of the BC Liberals and one day Premier, that he would overturn the bill from his first day.

The third of the Northwest MLA's, Jennifer Rice from the Northwest has yet to speak in the legislature this week and so far, she has offered no opinion on the Freedom Of Information controversy through her Social media field.

For more notes from the Legislature see our archive page here.

The Freedom of Information controversy is also making for some news from the media that covers the Legislature, you can review some of those commentaries and observations from our political blog and our Victoria Views feature.