Horgan Government takes the 'Free' out of Freedom of Information Access

An announcement Monday from the NDP government of plans to start charging British Columbians for their Freedom of Information requests, is raising alarms that it will serve to put another roadblock in the way when it comes to seeking information from government officials and government agencies.

Minister of Citizens' Services Lisa Beare attempted to put a COVID spin on the move as a way of protecting privacy in her statement upon the notice of the amendments.

“The COVID-19 pandemic changed the way we live, work, connect with loved ones and access the services we need. Today, people can safely talk to their doctor via Zoom, learn online and do business faster.

These amendments help people continue to access the services they need faster, while ensuring their privacy is protected. We’re making changes today to keep pace with advancements in technology and provide the level of service that people expect in the digital era.”

Noting of the input that the government received from a range of British Columbians the statement from Monday outlined the four key elements of the amendments:

The one catching the most notice almost immediately yesterday was number three and the plans for a fee towards further FOI request.

"introducing a modest application fee for non-personal freedom of information (FOI) requests"
You can watch Minister Beare introduce the bill yesterday from the BC Legislature video archive starting at 1:45 PM.
And while the Government statement, which you can review here, brought out a number of supporters towards their plans; the feedback from those that may be seeking Freedom of Information on a personal or professional basis was a little less flowery in praise.
A cross section from the Social Media pulpit of Monday night offers up some of the concern being raised over the plan and the impact it could have on British Columbians. 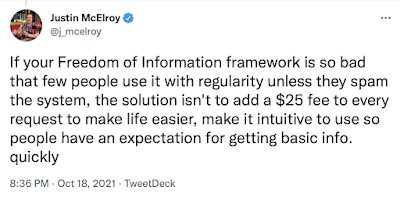 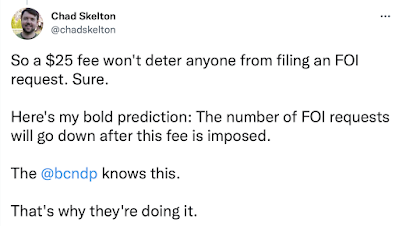 As CHEK News in Victoria has reported even Michael McEvoy,  British Columbia's Privacy Commissioner has been taken aback at the Government's plan to charge FOI fees, noting that while he was consulted, he was ultimately ignored.
Which in itself is a pretty remarkable thing to hear of the official tasked to ensure that there is a provision for independent oversight and enforcement of BC's access and privacy laws.
McEvoy issued his own statement yesterday following the introduction of the plan by the Minister, the key passage as follows"
“On access to information, some provisions of the Act improve the law while others do not. While making it an offence to wilfully destroy records to avoid complying with an access request is a welcome change, greater clarity is needed to capture improperly destroying a record before someone specifically requests it.
I am also concerned that government proposes to exclude from the public’s right of access, information deleted by a public body. Another troubling proposal will permit, for the first time, public bodies to charge a flat upfront fee for access to records.
Finally, while I support some of the proposed changes, this is a lost opportunity for government to promote greater accountability and transparency, especially by the Bill’s failure to provide comprehensive oversight of record destruction and inattention to longstanding calls for reform of advice and recommendations exceptions.
I expect my Office will issue a comprehensive analysis of the Bill in the coming days. I welcome the public discussion that will now follow from the introduction of these amendments.”
Handed a political gift such as this by the government, it's not surprising that as the Tuesday session of the Legislature has commenced, the Opposition Liberals are finding ways to navigate the topic of Freedom of Information into the discussion.
As they say in advertising ... Watch this space.
A look at how the Government explains Freedom of Information in the province (pending further change) can be reviewed here.
So far, the elected official for the the North Coast, NDP MLA Jennifer Rice has not weighed in on the debate over Freedom of Information, whether in the Legislature or through her Social Media feed.
More notes on the BC Legislature can be explored from our archive page.
Posted by . at 11:24 AM