Looking for the window to John Horgan's Political soul? He may have an app for that ...

Premier John Horgan hosted a week ending Press conference on Thursday, as this weeks session of a contentious Legislature week was coming to a close, the Premier speaking to a range of topical themes from the last four days in Victoria.

The conference lasting just a bit over thirty minutes, with the Premier opening his comments on the humanity that is found in the Legislature and the stories that are shared in the chamber on a daily basis, sending the Premier to note of his gratitude to serve as Premier and the member of Langford-Juan de Luca.

And on the dream of utopian times in the Legislature,  he then opened the gates to the Lion Pit for a barrage of questions for a Press contingent with a lot of things on their minds as the half hour played out.

The Vaccine card in BC and its compatibility with a newly announced Federal program led off the list, seemingly the take away from that is if you're planning any international travel, the Federal passport will be required.

"What I want British Columbians to know is, If you have no plans to travel in the immediate future, the 3.7 million of you who have already downloaded a BC immunization card, can continue to go to the play, can continue to go to a concert, go out for dinner with some friends. If you want to travel internationally, or federally regulated modes of transportation, you're going to require a Federal card.

And you can access that through British Columbia sources, and you can also of course access that by reviewing whatever Material and information the Federal Government is providing at that time. But you're going to require two at the moment and we'll see how we go in the months ahead how we can bring those two together ."

The Premier also noted of his concerns over the testing requirement for Canadians returning to the country from the soon to reopen American border, though he noted he found the idea one that doesn't make sense to him.

Mr. Horgan adding that he had cancelled a planned trip to talk with the Washington State governor and other officials, partly owing to the testing regiment but also noting that he was aware that not all British Columbians can make that trip just yet.

In further questions on the topic, Mr. Horgan observed that discussions will continue with the Federal Government over the topic of vaccine passports and other COVID related themes.

The week of controversy on Freedom of Information made for another hot discussion topic and the Premier held his ground on the plans for change to the Legislation, though with some wriggle room.

"We haven't settled on a fee, the bill allows a fee to be set by regulation. Other jurisdictions have fees, we felt that it was important, for executive council, for cabinet to be able put in place a fee if we felt it would be necessary, after debate in the Legislature which has been vigorous as everyone would expect.

But no fee has been set and no commitment to actually have a fee is in the legislation, there is the ability to prescribe one and that will unfold after debate and after passage of the bill and the bringing on of the regulations.

It's not our intention to restrict access, people's individual access there will be no fee for individuals looking for information"

The Premier at that point provided a look at his cellphone, using it as his visual assist as he asked why the opposition feels that the cellphones of  public servants should be available to them, adding of his view of how the act has not been used properly and how some of the opposition themes do not make much sense to him, framing the roll out as a way of modernizing the current program in place.

As for the recent correspondence from the Commissioner of Information and Privacy (read it here) and his seven pages of concerns related to the legislation, the Premier noted that they disagree on some things.

"First of all you're suggesting that the seven page letter was seven pages of criticism, it's not, there's elements we agree on and those are articulated in the letter as well.  One example, the letter suggests that the Premier's Office is now exempt from FOI, it's not, the Premier's Office is integral core government ... We're modernizing the act based on the experience of professional public servants over three decades now since the bill was originally brought forward.

So, I believe that the changes that we're making are in the interest of full disclosure, in the interest  of making sure that the public can have confidence that their privacy is being respected and that government information is available to those who seek it after all of the appropriate reviews by government employees.

Which is again part and parcel of the advice that we regularly get not just from this privacy commissioner but from previous commissioners."

As to a question as to whether he isn't being a hypocrite on the topic, having used FOI in the past the Premier replied.

"Look I said today in the Legislature, if this bill passes, those that used to work in the Premier's office who regularly  destroyed documents would not just be ridiculed because they were exposed; they would be fined, heavily, for disposing of documents.

We have beefed up enforcement, so that we can ensure that documents are made available, and they are not subject to a shredder if there's something that doesn't make the government look good. I think that's step in the right direction and I think most people would agree with that.

You'll remember, famously the deputy minister to then Premier Gordon Campbell, talked about a verbal culture within government. I believe that we need to take steps to ensure that is not the order of the day. And that there are documents that are produced and recorded and available that demonstrate why decisions are made and that's the direction we want to go to when it comes to freedom of information"

The final question focused on the one year anniversary of the NDP government's return to office with a majority, allowing for an opportunity for the Premier to recount some of the history of the pre election period and what has evolved since the government returned to its duties.

The Full Q and A can be reviewed below:

One element of the media availability of the day that has caught some attention through social media,  was that moment that the Premier whipped out his cellphone to showcase his opening screen; the widgets of political leadership seemingly including a weather app that will always tell Mr. Horgan what the weather is in Prince Rupert. 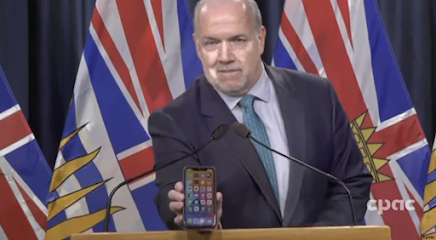 Along with the 24 hour/seven day availability of weather forecasting for the North Coast should he wish to drop in on MLA Jennifer Rice, Mr. Horgan's cellphone also hosts Spotify, which we imagine is full of some of the great NDP battle songs of days gone by ...

Perhaps featuring the anthems of Billy Bragg, Bob Dylan, maybe a little Stan Rogers for some Canadian content, though it's doubtful that he has any Bryan Adams to fill out the music list at the moment.

We haven't had a chance to see the Premier's Spotify list, though CBC Daybreak's North, Carolina de Ryk has an idea as to who should be on the John Horgan hit parade.

And as a long standing North Coast radio personality she worked in a little local music to go with the Premier's weather reviews. 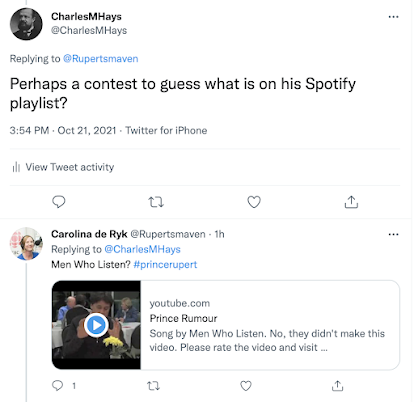 And while the music stylings of Men Who Listen surely is something for any politician to tap a toe to, judging by the last few months in this anniversary week of the NDP"s return to office with a majority government; we just have to guess that there is one song on that Spotify list that just blares out on the way to the Leg each morning.

For more notes on items of interest from the Legislature whether from this contentious week, or those of the past,  see our archive page here.