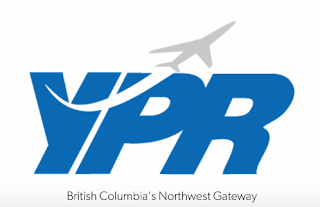 The Prince Rupert Airport Authority and Prince Rupert City Council will have some more executive searching to take care of in the weeks ahead, with the Manager of the City's Airport Rick Leach announcing his departure for Seattle, bidding his farewells to the community through an item posted in a story from the weekly newspaper.

Mr. Leach who had four years of service on Digby Island, is relocating with his wife to Washington State, his final day of work was on Friday.

During his time in office, the airport saw a range of terminal improvements put in place, including changes to the approach on customer baggage collection at both the Airport and downtown shuttle terminal on Sixth Street.

But it was also a period where the airport suffered during the COVID period of the last eighteen months,  with the elimination of Prince Rupert as a destination for a period of time, as well as a reduced air schedule from prior to pre-COVID days.

The departure of the Manager comes as the Prince Rupert Airport continues to look to rebuild on its passenger levels coming out of COVID-19, with Air Canada still the only scheduled air provider to service the community with to date a once a day scheduled service to and from Vancouver from Prince Rupert.

Neither the Airport Authority or the City of Prince Rupert has noted of his departure from the local aviation scene, nor is there any indication to date as to what they have in mind towards a replacement to fill the vital role of Airport Manager.

The topic has also not come up for note on the Mayor's Facebook page to date, Mr. Brain, along with the City Administrator and members of Council, serves as members of the Airport Authority.

The organization consists of eight directors who oversee the operations of the airport and are appointed for a two year term.

For more notes related to Aviation across the northwest see our archive page here.