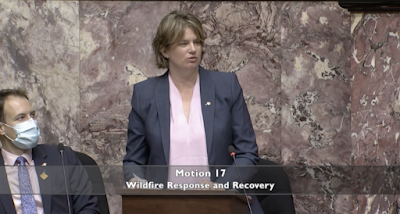 A new week arrived yesterday for members of the British Columbia Legislature and among those on the roster of speakers on the day was North Coast MLA Jennifer Rice, the Parliamentary Secretary for Emergency Preparation providing a review of the NDP Government's response to the summer of wildfires of 2021.

In her remarks, Ms. Rice made note of what was one of the worst wildfire seasons in British Columbia history, one which  saw two lives lost, consumed over 860,000 hectares, displaced more than 32,000 people and destroyed over 500 structures including many homes.

The text of her presentation can be reviewed from the Legislature Archive page just after the 11:15 mark of the morning session.

The MLA's commentary for Legislature can be reviewed below:

For more notes on the work of Northwest MLA's in Victoria see our archive page here.