The most recent gathering of the Prince Rupert Board of Education marked the debut of their new video Archie program, the elected officials of the School Board following up their plans first announced in September to provide for a permanent record of their monthly sessions.

The October 12 session, which was a virtual session with participants engaged through zoom began with a land acknowledgement from Board Chair Kate Toye.

"I would like to acknowledge that we are gathered tonight on the unceeded traditional territory of the Coast Tsimshian, Sm'algyax speaking people"

With the Chair adding her own perspective to the path forward on reconciliation.

"I would also like to acknowledge that as an uninvited guest, I believe it's my responsibility to educate myself about the Coast Tsimshian people's relationship to the land their culture and their history "

As the session was the first to be recorded, the Board Chair also offered some guidance for participants on the evening.

Superintendent Andrew Samoil took over from that point to introduce the first item of the night's agenda.

That a presentation from Erika Boker from Ecole Roosevelt Park Community School related to their Garden Project, which just completed the first year of its program with planning now underway for Year 2 of a three year program.

Ms. Boker also noted of the assistance from EcoTrust Canada's Charles Gerein, who is the manager of the community garden on Second Avenue West. 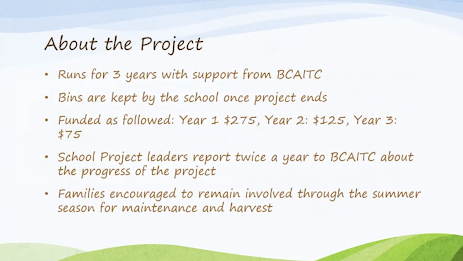 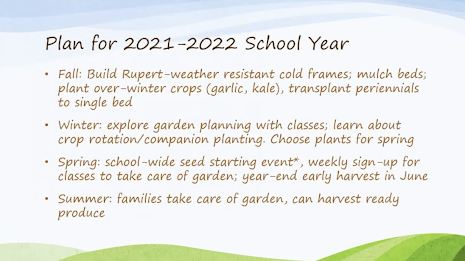 Among some of the other elements of the night was a discussion related to International Student tuition and a quest for more equitable funding for Districts across the province. As part of the discussion it was noted by Trustee Last that for the most part the parents of those students choose larger communities over smaller ones such as Prince Rupert.
The Board Chair noted that the topic of looking to attract International Students to the District is perhaps something for further discussion at a later date.
The Board also voted to produce a letter of support that would note how much has fallen on Senior Staff without any additional funding support for staff.
Some of the  themes that made for the most significant news from the session included:
The advisory of student enrolment numbers which show a continued decline for SD52 with Superintendent Andrew Samoil introducing Sandra Pond who noted that as of September 30th 1,830 students enrolled in the District.
Among the points of interest from the tally Ms. Pond observed that 156 students graduated Grade Twelve last year; while 121 new kindergarten students arrived this year making for a net los of 35 students from those two elements.
In follow up discussion Trustee Tina Last inquired of staff about the impact on the School District Budget from those declines.
"This is down about, seventy, so it's a little bit more than that, maybe eighty, ninety thousand dollars when we get down to the final funding. But it's hard to say for sure until we get the Ministry's numbers in December -- SD52 Secretary-Treasurer Cam McIntyre
The Board also heard a COVID measures update, what's ahead for the Strategic Plan update and notes on the Upcoming projects ahead and recent discussions with principals around the District.
The Board of Education also heard from Mr. Samoil that Paul Cox the SD52 IT  Manager would be departing the School District, taking up duties with the Prince Rupert Port Authority.
The Superintendent also noted of the Reconciliation Walk held at the Prince Rupert Middle School with many students participating and taking in the programming for the event. As well as a range of themes from the District Implementation Day period and the District's work on Reconciliation themes.
The Technology report made note of the need for awareness on online issues for both students and staff both at school and at home.
Trustees also discussed how they wished to word their Code of Conduct and Anti-Racism policy, something which they chose to forward to the District stakeholders.
There were no contributions made as part of the ten minute Question and Answer opportunity.
A look at the Agenda Package for the night can be examined from the SD52 website.
You can review the full 47 minutes from the October 12th session from the Rupert Schools Archive.
More notes on Education in Prince Rupert can be explored here.
Posted by . at 10:00 AM