John Horgan and the NDP members of the government flexed a little majority muscle on Tuesday, with the Government calling the vote on second reading for their controversial Freedom of Information Bill, a refresh of legislation that has been panned by most everyone that isn't sitting on the government side of the Legislature at the moment.

Among those who cast the approving vote to move the bill forward was North Coast MLA Jennifer Rice, and despite not speaking to the bill in debate in the Legislature, or indicating how she feels about the changes ahead for Freedom of Information through her social media stream.

However, when Coach Horgan tapped her on the shoulder on the bench, she registered her YES as well,  voting in favour of the government plans for Bill 22.

Ms. Rice was just one of Fifty Nays to stand up against a call from the 29 Opposition Liberals to abandon second reading and instead refer the Bill to a Special Committee for review. 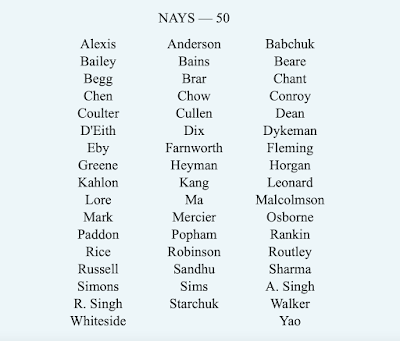 The North Coast MLA and two more NDP members found their way into the Chamber for a second vote later in the morning, that one to approve the Second Reading of the Bill, with 29 Liberals expressing their opposition to the proposed legislation. 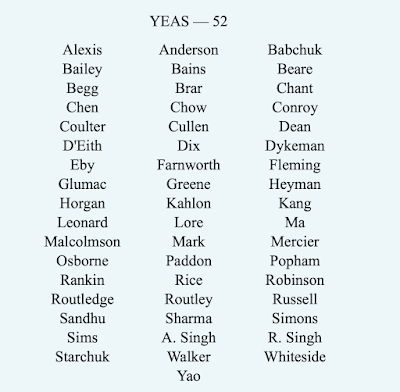 The Bill now moves on to The Legislature Committee of the Whole to be considered at the next sitting, with its push towards legislative status almost to the finish line.

The discussion of the Bill has mostly been one sided and fallen to the Liberal opposition since Premier Horgan's press conference of last week.

With the Premier seemingly setting the tone for the government side of the House that the time for talking in defence of the bill or about the concerns over the government plan was finished, with no other MLA from the NDP speaking to the topic since that time.

While the MLA's were voting Yea or Nay, the BC Freedom of Information an Privacy Association was hosting an online petition to try and convince the NDP Government to change its course on Bill 22, issuing a call to action for British Columbians to sign to help send a message to Mr. Horgan and his party. 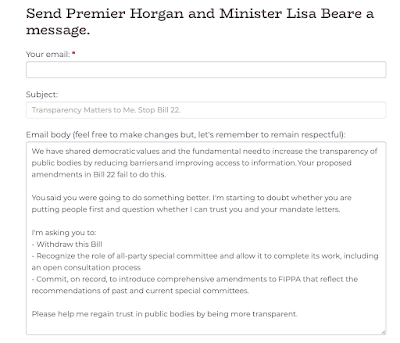 The BC Government's push towards getting the FOI discussion off of centre stage comes despite calls from their own Privacy commissioner to give the bill some second thought and address a number of areas of concern.

The Government's rush to ram through their Legislation has made for much in the way of writing material for some of the province's most read journalists in recent days.

The vast majority of the opinion pieces one that call out the NDP for their  approach to the topic and how they have used their Majority to bypass the opportunity for an all party review of the plans.

More from the Legislature can be reviewed from our archive page here.

A wider overview of the British Columbia political scene is available from our political blog D'Arcy McGee.