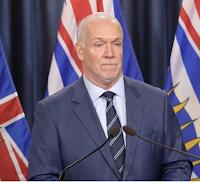 While the work week at the BC Legislature so far has seen a focus on proposed changes to the sharing of Information through the Freedom of Information process.

An announcement today from the BC Government that won't require any navigation of the tunnels of information or a twenty five, or five dollar charge.

That as Premier John Horgan and his NDP colleagues celebrate their return to office on October 26, 2020 as a majority government.

The snap election of the early fall last year which was called at the height of pandemic times, delivered the much cherished majority for the Premier and his team.

Though while it was an event which was fortuitous for the NDP, it was an exercise in democracy which did deliver one of the lowest vote counts in British Columbia's history.

Today in an information release, the government called attention to the NDP's view of the pending milestone of next week, providing for a few talking points for the public to review.

As the one-year anniversary approaches of the majority mandate, Premier John Horgan and the B.C. government are delivering on commitments to build a stronger B.C. for everyone.
From supporting people with the BC Recovery Benefit to the largest ICBC rate savings ever, the government has already made a difference in people’s lives during the pandemic and beyond.

The Premier himself celebrating that event and the NDP's claim to its majority with a few comments of his own.

“It's an understatement to say people have been through a lot over the past year. Even as the future feels uncertain for many, I want British Columbians to know: we will always keep working for you. We're going to keep delivering real progress on helping families with the cost of living, improving the services people need and supporting people to build a secure future.”

The victory lap redux comes complete with an expansive list of things that the NDP government notes that have been achieved since they returned to office one year ago, along with the premier's now common refrain to continue to their 'level best' in the future.

“Working together, we've made a real positive difference in people's lives, but there is still much more to do. We're going to keep doing our level best every day to build a stronger province for everyone – not just those at the top."

You can review the full statement here.

More notes on the work of MLA's at the Legislature can be explored here.