The members of the British Columbia Legislature have been debating and discussing elements of Bill 25, the Education Statutes Amendment Act which has been introduced by the NDP government, legislation that will amend the First Nations Education, the Teachers Act and the Criminal Records Review Act.

Much of the debate to date from members has been focused on the elements related to change for First Nations education, among those participants have been North Coast MLA Jennifer Rice and Skeena MLA Ellis Ross who both spoke to the topic this week in the Legislature. 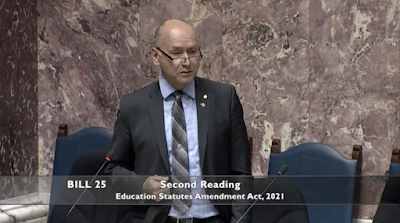 Mr. Ross led off the northwest review on Tuesday afternoon, with the MLA again raising his previous concerns over how he views the Province's consultation approach with the 203 First Nations across the province.

I had to get up and speak to Bill 25, the Education Statutes Amendment Act, 2021, that — amongst other things — actually promotes the ability of the province to come onto reserve and certify teachers on reserve. That's quite the complicated question, because on reserve, as we know, the province, in most cases, is not welcome.

It's federal jurisdiction. You have to be invited specifically to come onto reserve to implement anything provincial. In this case here, I never really had any issue with the objective of certifying teachers on reserve. In fact, many schools across Canada could use the certification that we're talking about in this House.

The issue I take, though, is that there's some misunderstanding that chiefs and councils don't already have this authority.

Mr. Ross then explored some of the elements of the act and what it seeks to address.

The bill, that UNDRIP promised by the NDP government, said they would consult the leaders and the rights and title holders of B.C.

Not once have I heard any legislation come through this House that actually recites the consultation that was done with 203 First Nations.

And It sounds to me like Bill 25 failed to deliver that as well. You're breaking your own law.

The wide ranging address covered a number of themes, including how the government is taking an approach of reconciliation towards its plans, something that the Skeena MLA had a few more thoughts on.

Because I was on the other side of that table actually helping implement it.

Reconciliation did include education. I did agree with that. But more importantly, it had an economic component to it that actually resolves a lot of the issues that we like to talk about, the social issues of Aboriginals.

So, I look forward to more speeches, but I do ask the government to keep it in perspective. It is not the silver bullet that you proclaim it to be.

You can review the full text of his Tuesday presentation from the Legislature Archive, while the video of the Session is available here, both elements start at the 6 PM mark. 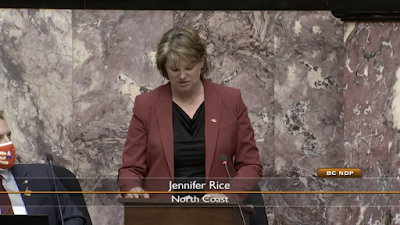 North Coast MLA Jennifer Rice entered the debate as part of the Wednesday session, Ms. Rice directed much of her attention on how the legislation will change the current approach for education in Indigenous communities.
Education can and must play a key role in reconciliation, and in creating equity and justice. That's why I'm happy to stand today and speak to Bill 25, the Education Statutes Amendment Act, which is about making legislative changes to support First Nations jurisdiction over education.
These legislative changes and their joint development are concrete steps in implementing the province's reconciliation commitments to advance education outcomes for Indigenous students, and work in partnership with Indigenous peoples.
These changes are in line with our commitments under DRIPA, the Declaration on the Rights of Indigenous Peoples Act, and in line with the calls to action from the TRC, the Truth and Reconciliation Commission's, calls to action.
In partnership with FNESC, the First Nations Education Steering Committee, we have announced legislative changes to amend the First Nations Education Act, the Teachers Act and the Criminal Records Review Act.
First Nations that are participating in the initiative will soon be able to certify and regulate teachers working in their schools.
And the legislative changes introduced will enable the province to provide operational support.
The legislation will also change the composition of the B.C. Teachers Council, the provincial body whose responsibilities include establishing certification, conduct and competence standards for provincial teaching certificate holders.
The changes will ensure representation on the B.C. Teachers Council by the soon-to-be created First Nations Education Authority, which is the body that will be made up of individuals appointed by First Nations participating in this initiative.
Ms. Rice, called attention to some of the past history of education in Indigenous communities, sharing observances on concerns of not too long ago for a community in the North Coast riding, Bella Bella.
The MLA making note of the work of educator Anita Hall towards improving education for the coastal First Nation Heiltsuk community.
I want to take a moment to highlight an educational leader in Bella Bella. Anita Hall is a longtime teacher and now principal in this school. She's a strong Indigenous woman, leading the school in a very powerful way. She's also a skilled teacher. Her students, like many students, come into her classroom at different reading levels. By the end of every year, every one of her students is reading at grade level.
She's a literacy expert, a learning expert and now principal and, just recently, a B.C. Achievement Foundation community award recipient. Anita believes wholeheartedly in the ability of those around her to succeed. As the elementary principal at Bella Bella Community School, she has created a place where students feel safe and included.
She exemplifies what a decolonial and community-rooted approach to education can look like. Through her vision, students thrive both academically and personally. Under her leadership, and in spite of the challenges that COVID presented, Anita has shaped a community school to which Bella Bella youth want to belong.
At Bella Bella Community School, 65 percent of the staff are Indigenous, and most of them are Háiɫzaqv, which makes a significant difference. Research shows that Indigenous learners learn better from Indigenous teachers, because they have similar cultural touchstones.
At Bella Bella Community School, culture and academia are intertwined. There is no separation.
My friend Ila Brown describes the school by saying: "We don't create the split; we harmonize them."
She notes that they have very high graduation rates because children do feel safe in their school. They are student-centred, because the Háiɫzaqv way is to be child-centred. Children are the very centre of the community.
An important takeaway from the Bella Bella school program is that people don't have to choose between being Háiɫzaqv and being an academic student. They bridge western ways of knowing and Háiɫzaqv ways of knowing. And bridge these worlds. They can be the same world.
I wholeheartedly support the amendments proposed in Bill 25 to support First Nations in B.C. to have autonomy over their own education systems and to see incredible success stories, like the Bella Bella Community School.
As was the case with Mr. Ross, the North Coast MLA's contribution to the discussion can be reviewed from the Legislature Archive page, and viewed through the Legislature Chamber Video archive, both elements begin at just after 2:45 PM
More notes on the work of the MLA's in the Legislature can be reviewed below
North Coast Archive
Skeena Archive
Themes related to education across the Northwest can be explored here.