Monday's Prince Rupert City Council Session offered an opportunity for a review of the Financial Variance Report, with the City's Chief Financial Officer Corrine Bomben relaying the data for the month of August for the City's Council members. 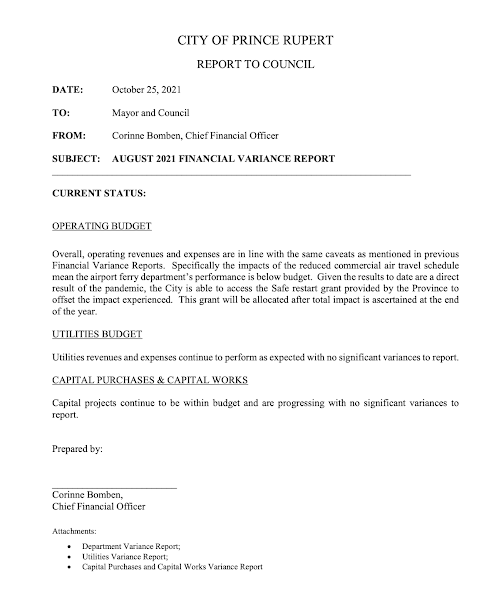 The main focus for her talking points focused on the area of Commercial Air travel to the community.

"The Safe Restart Grants Funds are eligible to address shortfalls related to the pandemic most notably in the Airport Ferry given the revenues in that department are significantly below what we had previously budgeted. More specifically because of the late retart of the Air Canada Flights"-- Prince Rupert CFO Corrine Bomben on the financial challenges of the Airport Ferry this year

Her written report expanded on that theme while noting that the grant will be allocated after total impact is ascertained at the end of the year.

Among her other theme for the report an observation that overall, operating revenues and expenses are in line with the same caveats as mentioned in previous Financial Variance Reports.

And as her financial listings indicate the Airport Ferry is feeling the brunt of the COVID related financial hit.

While the City had originally budgeted for Revenues of $550,000 for the Airport Ferry, the Revenue to date has only brought in $143,202. 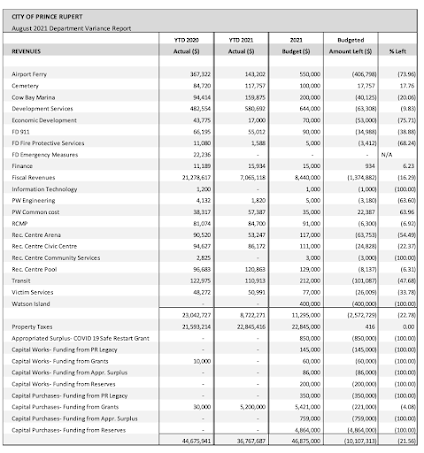 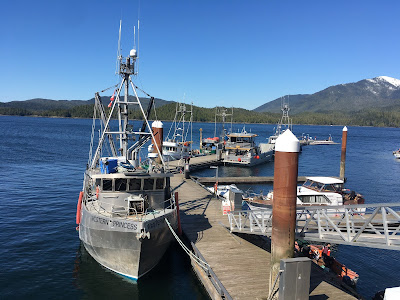 While not as dire as the Airport Ferry numbers, the Cow Bay Marina is also realizing less revenue than had been anticipated, the revenue forecast for 2021 had been set at $200,000 for the year, as of August, the Marina had brought in $159,875 in berthing fees, though the focus for this year appears to have been on offering space for fishing vessels in the region in the absence of the itinerant cruise industry.

Transit in Prince Rupert has also seen a decline in revenue, with the service bringing in $110,913 in revenue to August, down from the forecast of Budget set at $212,000. 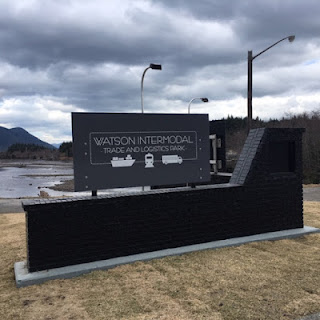 While no year To Date Revenue notes were included for The Watson Island line item the facility is budgeted at a revenue stream of $400,000. While the expenditures for the City's industrial site are listed at $303,612 as of August compared to a budgeted expenditure level of $400,000.

Ms. Bomben's verbal report was a short one, clocking in at 43 seconds and was a presentation that elicited no questions or comments from the Councillors, which is unfortunate, as they could have helped to shape a better understanding of some of the challenges that the City is facing.

Besides the topics noted above, a look at the main thrust of her report and the impact on the airport from the delayed return of air service to the community and the continued result of few flight options out of YPR might have been a helpful bit of review.

Providing a look at how the City is addressing the challenges of aviation in the community and offering a chance for Council to comment on the departure of the City's Airport manager as announced by the manager himself last week.

So far the City has not made mention of his departure, or what the plan is moving forward to fill the position.

You can review Ms. Bomben's brief overview from the City's Video Archive starting at the 16 minute mark.

More notes on the Monday Council session can be reviewed here.