And the rain will come down... 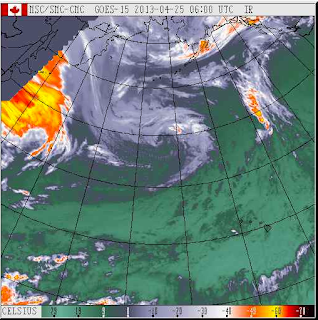 For those that took the time to enjoy the Sun of Monday and Tuesday, capture those images in your mind, as you won't be seeing them again for the foreseeable future.

A rather intense weather system is about to hunker down over the north coast, providing for two days of heavy rain totalling 100 mm on Thursday and Friday. Followed by more rain, though not quite as heavy for Saturday and Sunday, a two day period where rainfall totals will come to close to 65 mm.

All of which will make for a four day (Thursday-Sunday) total of over 165 mm of precipitation for the North Coast.

Winds on Thursday and into Friday will range from 50 to 70 kmh.  With Marine warnings in effect for coastal regions of the North Coast and Haida Gwaii. We will receive a brief respite on Monday, when the Sun will make a guest appearance, only to apparently be chased away again with Rain on Tuesday and Wednesday with a two day total of almost 85mm. 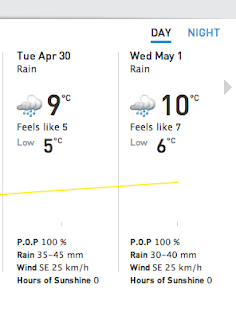 You can review the full Environment Canada forecast for the next week here.

Email ThisBlogThis!Share to TwitterShare to FacebookShare to Pinterest
Labels: Heavy Rains set to arrive on the North Coast for April 25-30