Even Okanagan residents need a getaway! 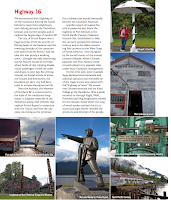 When most British Columbians think of a summer vacation, many think of heading to the Okanagan to take in the Sun, Heat, Beachers and Wineries of the Valley.

But, where do folks in the Okanagan head for when they want a break from all of those things that bring us to their doorsteps?

Well if an item in Okanagan Life is an indication, a few of them give some thought to taking a circle tour of the Northern areas of the province.

The Spring edition of the magazine offers up nine pages of Central Interior and Northwest attractions that might provide a boost for local tourism this coming summer.

The Circle North article outlines a number of must see destinations for travellers, from Haida Gwaii's beaches and totems, to Prince Rupert's Mariner's Park, Cow Bay District and the North Pacific Cannery Museum in Port Edward.

Not surprisingly, the  BC Ferry link between Prince Rupert and Haida Gwaii gets a significant mention as well, part of the overall travel agenda for Okanagan visitors.

As they head back home, a stop in Barkerville would seem to be on the itinerary as well,  as the Cariboo's Gold Rush Themed village gets an extensive review in the article.

The publication features a wide range of photos to go with their descriptive paragraphs and serves to introduce the Northwest and Haida Gwaii to a part of the province, that may at times forget that we're up here and waiting for a chance to show off the hospitality.

You can review the full article from Okanagan Life here.
Posted by . at 7:19 AM