The revelation last week that four more LNG projects are giving consideration to the North Coast, has provided for quite a bit of buzz on the topic around the community this weekend, with local residents wondering just what form of bonanza such a massive scale of industrial development might bring.

As we outlined on the blog last Thursday, the four new proposals have put the spotlight on the Grassy Point option for development, a position on the compass north of Prince Rupert, once favoured by Dome Petroleum in the seventies for potential development.

And as Gordon Hamilton of the Vancouver Sun reviewed in this article, the move towards the Grassy Point option, could change the dynamic not only of proposed developments, but perhaps the impact that such development may have on the entire region.

The Sun story has gauged the support level for an LNG project among the Coast Tsimshian, which is looking for any development to be mutually beneficial, with heavy influence to the protection of the environment as a key aspect of development.

The shift of attention to the Grassy Point option, might help explain the City of Prince Rupert's recent declarations on the prospect of expansion of the City's boundaries and how it is now part of 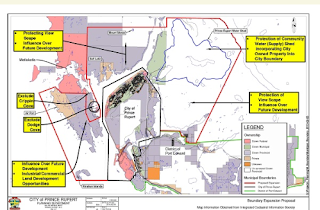 the conversation in the region.

You can review the City's proposal from their website, where the details of their plans have been provided.

With development outside of the City's current boundaries, potential revenue streams from such large industrial projects may slip away from the City, all while the demands on the existing municipal infrastructure and the need to expand it, will increase as the city begins to receive the benefits of large scale development and the associated growth that will come from it.

On the other side of that argument, the fact that the City has cast a covetous eye on some of the land of the surrounding area, has not escaped it's neighbours, both Metlakatla and Port Edward have weighed in with some thoughts, perhaps thinking along the same lines of the City as far as the potential reward from any development.

Where the LNG developments finally set up camp, if they even do, could make for more than a change to the industrial nature of the region, but provide some interesting talking points for all of the communities in the development area.
Posted by . at 7:01 AM