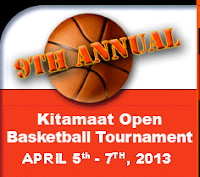 The 9th Annual Kitamaat Basketball Tournament proved to be another success and when the action was finished on the court, Prince Rupert teams had placed second in both the Mens and Women's competition.

Tournament play took place in Kitamaat from April 5 to 7.

In the Men's Tournament, Prince Rupert's Lights Out squad came in second to the Van City Untouchables, dropping the Championship match 82-72. Desi Collinson was named to the Men's All Star team from his efforts in the tournament.

On the Ladies side, the Prince Rupert Thunder came in second to the Haisla Senior Women, two Rupert players were named to the All Star team in the Ladies competition, with Denise Wilson and Neely Humperville recognized for their performance on the court.

You can review more information on the tournament from the District of Kitimat website.
Posted by . at 10:21 AM