On LNG, Gitxaala Nation says, whoa, wait a second there... 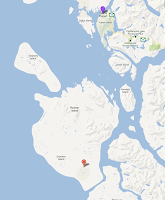 The prospect of multiple LNG export terminals, pipelines, tankers and all of that involved in the push for development of LNG infrastructure on the North Coast has given the Gitxaala Nation cause for pause and to set in motion a legal  challenge of the recently granted LNG export licence.

Applying to Federal Court the Gitxaala nation has applied to have set aside, the 25 year export licence recently granted to LNG Canada Development in Kitimat.

Setting in motion a challenge to amendments that the Federal Government made to Bill C-38 last year, which eliminated the requirement of assessment reviews.

According to Robert Janes, the lawyer representing the Gitxaala Nation, the challenge will mark the first time that a court has been asked to consider the amendments from the Bill C-38 changes.

The First Nation located to the south of Prince Rupert reportedly first outlined their thoughts on the topic back in September of 2012, raising concerns with the Federal Minister of Aboriginal Affairs. Officials of the Department of Fisheries and Oceans, Transport Canada and the Environment Ministry were also advised of concerns of the Gitxaala Nation at that time as well.

A full review of their legal movements can be found through the metronews portal, which was first to offer up word of the Gitxaala court plans today.

The Gitxaala concerns with the NEB licence process  were outlined last month in a feature item in the Tyee, which provided a review of the controversy and offered up the rumblings of potential court action.

It's not the first time that opposition to the proposed LNG developments has been raised, you can review some of the background on past concerns from the LNG file from our archive page.