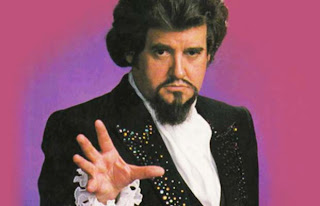 Monday was a rather busy day for obituary writers, news of the passing of Margaret Thatcher and Annette Funicello no doubt providing much in the way of memories for a segment of various generations.

For Prince Rupert residents however, word of the passing of Reveen, the illusionist/hypnotist/magician, perhaps will be the one name they can at least express some personal connection to.

The long time entertainer, who retired in 2008, passed away in Las Vegas on Monday at the age of 77.  He had been suffering from dementia and diabetes over the last few years and it was complications from them that led to his passing on Monday.

He first immigrated to Canada in the early 1960's and quickly became a popular figure from coast to coast, bringing his shows to large and small centres alike.

In his day of entertaining he made Prince Rupert a frequent stop on his Cross Canada tours, his shows turning Rupertites into Chickens, Opera Singers, Dancers, Pilots or any other possibility that popped into his, or his audiences mind during the show.

His shows provided for popular family entertainment and made for large crowds whenever Prince Rupert would appear on the tour schedule.

Having settled in Las Vegas, he was a fixture at a number of the Las Vegas entertainment centres and in addition to his performances he took on the challenges of artist management. His final tour took place in 2008 and not surprisingly considering his time spent above the 49th, his final tour was one of Canada.

While the "Man They Call Reveen" has now passed on, the name and the show will go on, upon his retirement he turned over the family business so to speak to his son Ty. He continues on with the family tradition to this day, travelling across Canada with his own show, working under the billboard of Reveen: The Next Generation.

His son provided perhaps the best quote of a son taking over the family business from a high profile father:

People ask me all the time, ‘What’s it like being Reveen’s son?’ and I say well at least we went to sleep when we were told to,”

You can review some of the tributes to the showman below: