When they aren't discussing such things as the works of Dr. Seuss and the fashion statements of the Charter of Rights, School District 52 actually does tackle some of the educational aspects of life on the North Coast.

The recent School District meeting of April 9th, provided for a bit of a disagreement between School District trustees and the Administration of School District 52, mainly over the prospect of spending some 10,000 dollars on succession planning, which mainly involved promoting two teachers to Vice-Principal positions.

Four of the trustees, Janet Beil, Louisa Sanchez, Barb Gruber and Marty Bowles, apparently were not swayed by Secretary-Treasurer Cam McIntyre's thoughts that the move would not cost the District anything, voting to defeat the 2013-14 budget in the process.

Board Chair Tina Last was in favour of the funding for succession, with retirements coming up in the future, suggesting that this was the time to make some plans for the future.

Trustee Marty Bowles however, was more concerned over the prospect of classroom composition in the district, suggesting that was where the focus before anything else.

Prince Rupert District Teachers Union President Joanna Larson was in attendance at that School District meeting and observed many of the points of Mr. Bowles, both the on the succession plan and the topic of classroom composition. 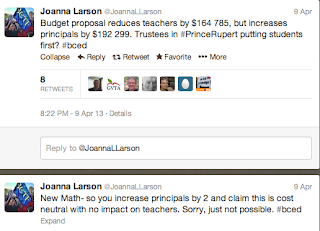 The Northern View's Martina Perry had a full review of the School District discussion on the topic, though curiously it is not yet available on the Northern View website.

The School District meeting review first appeared on the front page of the Friday print edition of the Northern Connector, which is where you will have to seek it out for the moment. 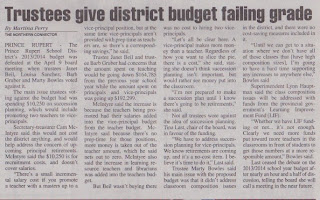 As of today, the item still was not available on the Northern Connector e edition website either.
Posted by . at 9:37 AM