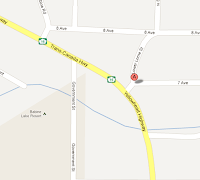 Reports out of Burns Lake on Sunday, provided the details that protesting Band members who had occupied the Band offices  in a simmering dispute with Band leadership, had been removed by the RCMP on Sunday afternoon.

The police operation involved officers from detachments from across the region, with the RCMP sealing off the Band Council offices with a perimeter marked by police tape.

The situation was resolved by 2:30 in the afternoon, as the remaining protestors who were occupying the building agreed to leave.

The protest which had been an ongoing issue in the community since late March, began when some members of the band accused Chief Councillor Albert Gerow with failing to consult members before signing deals with large companies in the region.

The Group which called itself the Burns Lake Elders Collective Committee had nailed boards across the doors of the band office on March 25th.

Some background to the protest can be found below.