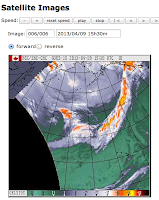 While it's arrival on the North Coast appears to have been a little behind schedule, the Wind Storm which we advised of yesterday, has finally made its landfall around Prince Rupert.

With the winds ramping up in intensity, the Prince Rupert Port Authority suspended activities at the Fairview Container Terminal on Tuesday and had tugs on standby to assist freighters in Prince Rupert harbour should their services be required.

In addition to the operations of the Port, the west side of the City suffered a power outage on Tuesday morning, with the City advising that power had been restored to some of the affected areas at 10:00 AM.

By that time only two areas of the city were without power, the Sloan - Omenica Avenue areas and a stretch of 2nd Avenue West.

With the strong winds expected to continue through the morning, the prospect of further power interruptions is a possibility. You can find updates from BC Hydro from their Service Outage page.

BC Ferries has also suspended its sailings until the weather situation improves.

Further updates on the Weather can be found on the Environment Canada website.