Election campaigns normally provide for much in the way of promises and in the end it seems little in the way of policy, but on the topic of BC Ferries, it would seem that changes will eventually come the way of our transportation network, regardless of which party claims the election victory on May 14th.

As we first outlined earlier this month, the proposed ferry service reductions scheduled to go into effect over the summer were deferred by the Government until at least 2014 and one imagines that the status of the ferry service will be one of the key aspects of governance in the months and years after we cast our vote on Election Day.

The prospect of change for the Ferry Corporation has begun to gain a foothold in the election campaign, the NDP having released its platform (though not its overall plans for BC Ferries) should they take charge of the Government with a mandate from the people.

The key point to the election platform offering is the plan of the NDP, to freeze ferry rates for two years while conducting an audit of BC Ferries' operations. The projected cost to prevent the rate increases would be approximately 40 million dollars over two years. 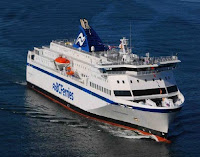 The announcement from the NDP on Wednesday, did not however offer up any indication as to what form or direction the NDP would like to see the Ferry System move towards if under the control of an NDP government.

The nature of the Ferry Service and its future, is of course of large importance to North Coast and Haida Gwaii residents, with Prince Rupert a main terminal for Northern Operations, any changes to the system or fee increases could have an impact on many aspects of life on the North coast.

A subject which could be one of the main topics of debate on the local campaign trail as we head towards May 14th.

Bill Good examined the NDP proposal on Thursday morning with participation from both the NDP Ferries critic Maurine Karagianis and Liberal Transportation Minister Mary Polak offering up their thoughts on the Ferry Service, you can review their contribution to the discussion from the CKNW Audio Vault (8:30 - 9 AM)

More background on the topic of BC Ferries can be found below:

Email ThisBlogThis!Share to TwitterShare to FacebookShare to Pinterest
Labels: BC Ferries election topic