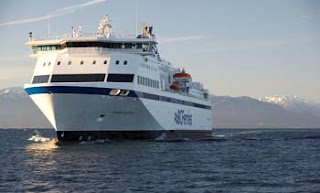 At Monday night's City Council meeting, Councillor Jennifer Rice provided an update on the recent session of the BC Ferries Advisory Committee.

(See our Council Timeline for April 8th for a recap on her information.)

Attending meetings in Vancouver on behalf of the City, Councillor Rice offered up a bit of welcome news for travellers on the northern routes of BC Ferries.

Delivering the word that the Ferries Advisory Committee meetings had heard from the Province of British Columbia, that the planned cutbacks to service planned for those routes planned for June, had been delayed until March of 2014.

The topic of BC Ferries hasn't become a high priority on the election campaign so far, a subject that Brian Lewis, writing for the Vancouver Province explored yesterday.

The future of the Ferry Service up and down the coast will most likely be addressed by a new government after the May election. A topic that current Transportation Minister Mary Polak addressed last month.

As for the Councillor's scoop for her council partners, no official confirmation of that decision has yet to be provided on the Ferries Advisory Committee portal or that of BC Ferries, so for those that prefer their news in written form, the confirmation will have to wait just a little bit longer.

For the moment, we do have the Councillor outlining the details and background to the decision, you can review it from the City's Video Archive her presentation on the Ferries Commission news can be found at the 58 to 60 minute mark of the night's meeting.

On April 15th, The Northern View provided this item on the Ferry Service cuts being delayed until 2014.
Posted by . at 8:41 AM

Email ThisBlogThis!Share to TwitterShare to FacebookShare to Pinterest
Labels: BC Ferries service cutbacks delayed until March of 2014