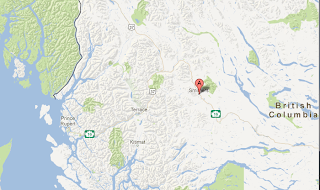 The Premier is making a quick swing through the Northwest today, spending the morning in Terrace before heading off to Prince Rupert and Port Edward to offer support to Liberal candidate Judy Fraser on the North Coast.

As would be expected, the Premier's travels through the north and into the Northwest makes for a rather large travelling pack from the media, all ready to record the events of the day and any items of newsworthy developments than may come from the trek. 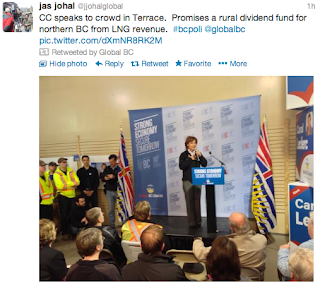 The theme of her whistle stop tour of Terrace, Prince Rupert and Port Edward would appear to be focused on the province's northern resources and the importance that Prince Rupert/Port Edward will play in the development of them.

She was in Prince George yesterday, to reinforce that riding's importance as a battleground  portion of the province,  and again the theme of her tour of the North East region and Central Interior focused on the resources of the North and the importance of the region to the province and its economy.

The Liberals are livestreaming the Premier's tour of the region through the day, you can access that feed here.

We'll update items of note from the swing westward as they become available.