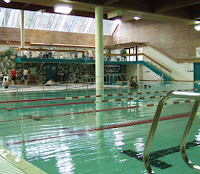 We can see those tourism  advertisements now...

When in Prince Rupert be sure to visit the Don Krusel Sauna, take a dive off of our Fairview Terminals Diving Board and make sure that you stop in and ask for a tour of the Pinnacle Pellet Hot Tub...

Well, OK maybe not, but should the City of Prince Rupert prove successful in their quest to have the Port take over some of the funding issues for civic amenities, they may wish to offer up some kind of public acknowledgement of any potential Port, or Port partner provided financial rescue monies.

We're not sure exactly how much cash that Councillor Joy Thorkelson and some members of Council may wish to squeeze out of the Port of Prince Rupert with their latest talking points from Council session.  They did not declare any particular dollar amount on Monday, as to what they might have in mind from their new approach to financial planning.

But clearly some council members have done a little napkin math and already figured out that the Port is rather proactive when it comes to "community" donations in the region, as a quick scan of the Port 's community contributions will outline.

With the City facing no shortage of funding requirements of their own, it would appear that Council would like to see some of the city's requirements put on the direct donation list and get some share of the Port's charitable cash-flow.

With the City receiving financial bad news on a weekly basis of late, (here and here) one thing seems certain, Council would desperately like to have a sit down with the Port to try and gain a little relief from the City's budget woes.

For the second council meeting in a row, Councillor Thorkelson  brought up the topic of the Port of Prince Rupert and the financial revenue that it provides to the City through the current payments in lieu of taxes process. An arrangement which in the minds of some members of Council isn't apparently providing as much of a financial benefit for the city, as they think it should.

This weeks request for a meeting with the Port was a little bit more genteel than that issued last week, when Councillor Thorkelson was clearly in a more cranky mood about the Port and its place as a member of the community.

The Councillor offered up the more amiable nudge on Monday night, suggesting that the Port wouldn't wish to see community closures of the pool or library for instance. Offering up the thought that maybe, the Port may be inclined to lend a financial hand with some of the items at the pool.

A rather proper choice for a talking point we guess, considering that at the moment, this Council finds itself in the deep end of the financial pool, treading water as fast as they possibly can.

Regular readers of the blog will find our reviews of Council and its interactions with the Port rather instructive as to the nature of the working atmosphere between Council and the region's industrial base.

Over the last few years, the Mayor and some Council members have been quite vocal both in Council chambers and with the media,  about expressing their displeasure over any number of items with the Port and some of the industrial partners it has attracted to the region.

At times Council it seems, tends to weigh in on matters that appear to be far removed from what many taxpayers might think of as their mandate. Spending much in the way of time discussing their complaints or concerns with the Port, CN, Ridley Terminals, Pinnacle Pellet or would be LNG Terminal developers to name a few of the issues of late.

On occasion they have even in high dudgeon, summoned Port Officials or other industrial executives to council chambers to answer Council's questions, at times leaving the guests to sit back and feel the wrath of Council as it vents on its frustrations.

A few of those interjections to the Port's developments around the region can be found below.

You can review more of Council's discussion points of the last year form our archives here.

When it comes to the various topics around the council table these days, rather than expanding the scope of their scheduled gatherings, perhaps streamlining Council sessions to just those items of direct civic purview, might provide for a more attentive grasp of what are important issues for civic governance.

Leaving those many other discussion points outside of the normal scope of the civic concern, to remain the domain of each Councillor's particular day job.

It's a particularly interesting dynamic at work when you compare those past discussions in Council chambers with the Port, as opposed to the sessions with the City owned communications company, an organization which rarely finds its workings subject to a similar amount of interest.

All told, an interesting allocation of civic efforts, though perhaps if Council had spent as much diligence on the issues surrounding CityWest, or in addressing in a more timely fashion, the downward spiral of property assessment values in the community, they might have had a better handle on their current troubles.

Towards that theme, this week Council couldn't work up much more than a good bit of theatrical anger over Monday's CityWest bombshell announcement of no dividends this year (a financial setback that they appeared surprised from).

With the City of Prince Rupert the sole shareholder in CityWest, one would think that the City should presumably have some kind of active interest and oversight over it.

However, for the most part, it appears that when it comes to their Communications company, the City holds a rather dis-interested nature for most of the year. A peculiar approach,  especially when you consider how much the City relies on CityWest as an instrument for budget calculations.

When you frame all these recent developments in a prism of the City not having  taken care of it's own house. You have to wonder what kind of success the City will have, as it tries to convince the Port and its partners in the region into opening up their wallets to help this particular Council out of its financial travails.

Maybe the Port will just forward them the name of a good financial planner, one that could offer up  Council some helpful guidance moving forward.

Email ThisBlogThis!Share to TwitterShare to FacebookShare to Pinterest
Labels: City Council looks for Port to lend a financial hand during budget considerations