4.0 magnitude temblor off the coast of Vancouver Island Tuesday morning 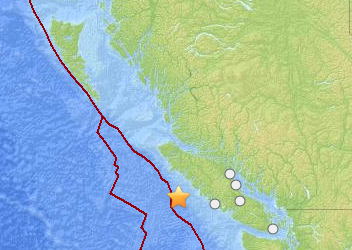 While residents of the North Coast were battening down the hatches during the windstorm, down Vancouver Island way earthquake observers were watching the gentle rumbles of the latest of seismic events to travel along the Pacific fault line west of Tofino.

A 4.0 magnitude temblor struck off the coast of Vancouver Island at 10:17 AM this morning, located some 120 km West of Tofino, estimated to be at a depth of 10.8 km.

No damage or injuries were reported from the event and no tsunami warning was generated.

It's the first sizeable quake at the 4.0 range and above measured along the region so far in 2014.I

n 2013 a string of similar sized temblors were recorded up and down the fault line of Vancouver Island. The most recent one previous to this evening was recorded on December 15th, in much the same area.

You can review our items from last year from our archive page.
Posted by . at 6:52 PM