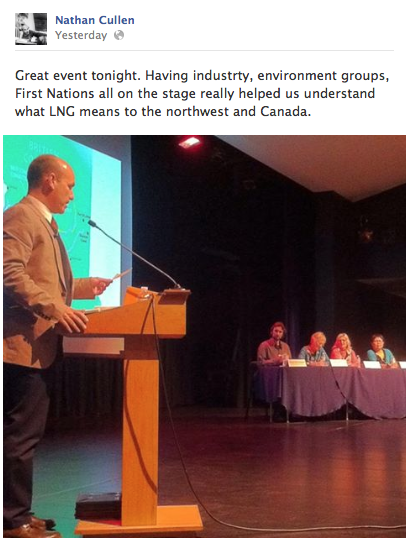 With NDP MP Nathan Cullen preparing to relaunch his "Let's Talk LNG" Discussion session in the Northwest,  the MP for Skeena-Bulkley Valley has delivered to his constituents some more material to review on the theme.

"The rise of LNG in the Northwest is an opportunity to broaden the conversation, and to remind governments and industry of what we all want: a  smart approach to resource development. One that respects people as citizens, not as some inconvenience who just happen to "be in the way". -- NDP MP Nathan Cullen, from his "Getting things right LNG household mailer

In a household mailer arriving in Northwest mailboxes this week, Mr. Cullen has provided two pages of talking points on the theme of "Getting Things Right when it comes to LNG", outlining the NDP vision on energy production in Canada.

Included in that vision statement:

Sustainability: to make sure that polluters pay for the pollution they create instead of leaving those costs to the next generation and the public at large.

Partnership: communities and First Nations should all benefit from resource development and the value-added jobs they bring us here in Canada.

And, most importantly long term prosperity: the time to invest in modern, clean energy energy is now. This keeps Canada on the cutting edge of energy development.

Towards the discussion on regional development, Mr. Cullen reviews his commitment to making sure communities are consulted and voices are heard.  Adding that, any development projects need to have the social licence from the people who live there.

As we outlined on the blog back in the fall, Mr. Cullen first introduced that concept of the Social Licence in a previous household mailer, you can review the point by point on that proposal here.

The MP resumes his Let's Talk LNG discussion tour in February, with a pair of make up dates from the first round of the fall.  Mr. Cullen takes the tour to Smithers on February 19th and Prince Rupert on February 20th. Previously scheduled sessions in the fall had to be re-scheduled owing to conflicting schedules of the participants.

More on what his Let's Talk LNG project is all about can be found on the MP's website.

For those that have not received the mailer this week, or perhaps somehow put to the recycling pile, a  version of the latest talking points can be reviewed from the items below.