The Aussies are joining in on British Columbia's LNG party, with word that an agreement for a second proposal for the Grassy Point region has been reached between the Province of British Columbia and Woodside an Australian LNG firm.

"Woodside looks forward to working with the Government of British Columbia, the First Nations and the community as we assess the feasibility of an LNG development at Grassy Point," --- Peter Coleman, Woodside CEO and managing director.

The proposed natural gas export terminal would be located on the southern parcel of land near Grassy Point, and brings the Australian company into the growing group of energy companies in the region.

Woodside is the largest independent operator of oil and gas development in Australia, where it features an extensive network of LNG operations.

You can learn more about the Australian energy company from their website here. 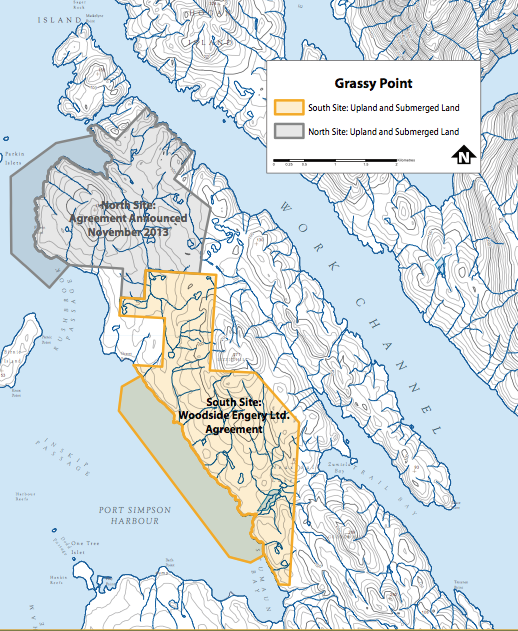 Today's announcement is a result of the Request of Interest that the Province put out in February of 2013.

Woodside joins with the current proposals of three LNG export facilities around Prince Rupert, today's announcement is the second one directed towards the Grassy Point area.

In November of 2013, CNOOC/Nexen announced that they had reached terms with the Province to develop an LNG terminal project known as Aurora for the Grassy Point region.

The arrival of Woodside to the region, adds even more international flavour the the proposals of the North Coast. Along with the newest arrivals and the Chinese group from CNOOC; Malaysian Petronas and British Gas have also outlined their plans for development of LNG terminals for the region.

Details on today's announcement, which outline the terms and the payments involved can be found from the British Columbia Government website.

No further information on the timeline of the project, suppliers of the gas and other items of infrastructure were released at today's briefing.

You can access more information on all of the LNG developments planned for the North Coast from our archive page here.
Posted by . at 11:28 AM

Email ThisBlogThis!Share to TwitterShare to FacebookShare to Pinterest
Labels: Australia's Woodside Joins in on the North Coast LNG terminal proposals