With the end of another regular season for the Prince Rupert Rampage, the CIHL hockey club and the Prince Rupert Port Authority have tallied up the goals and when the math was done, the Salvation Army was provided with a sizable donation towards their projects on the North Coast.

As they have in past years, the Prince Rupert Port Authority signed on as a title sponsor of Rampage hockey in the community, a vital component of the Rampage success in town and  offering up the chance to continue on with their tradition of providing an impressive charitable donation based on team achievement.

This year, Rampage players found the net 34 times at games played in the friendly confines of the Jim Ciccone Civic Centre, a burst of offence that generated 100 dollars for the Salvation Army every time the red light went on at the Jim. 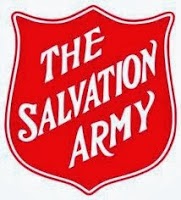 When Sunday's thrilling 5-4 victory by the Rampage was recorded, the Port provided a donation of $3,400 towards the Salvation Army's food bank, shelter and other community services.

The donation makes for  a prime example of the ongoing commitment to the community that both the Port and the Rampage have taken on over the years.

The nature of the team's community involvement and the entertaining hockey on the ice is one of the reasons that Prince Rupert held down first place in attendance in the 2013-14 season.

With the conclusion of the regular season on Sunday, the Rampage had attracted at total of 5,240 fans through their nine home games,  262 more than their next nearest competitor the Quesnel Kangaroos. The average attendance for a Rampage game this season was 582 per game.

And the Rampage hope add to those attendance totals and have a few more games to come at the Jim in the next few weeks, the club starts out on the CIHL playoff trail on January 25th when the division leading Terrace River Kings arrive in town to launch the Best of Three West Division Semi-Final.

We have more background on some of the other community projects that have been assisted by the Prince Rupert Port Authority from our archive pages.