Northern Adventure returns from refit, Northern Expedition heads in for one 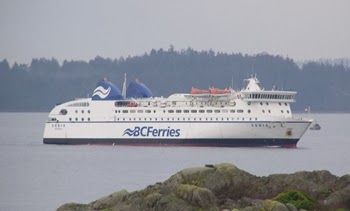 Starting today, BC Ferries has swapped out vessels for the Northern Routes, with the Northern Adventure returning to service on both the Haida Gwaii and Port Hardy runs.

With the arrival of Northern Adventure from its annual refit program, the Northern Expedition now sets sail for its own bit of R and R, the anticipated return to full strength of the vessels of the Northern Fleet is expected to be sometime in the Spring.

You can review some background on the announcement from this media release from BC Ferries.

We have more items of note on BC Ferries service and issues on Ferry Transportation on the North Coast and Haida Gwaii available on our archive page.
Posted by . at 1:53 PM