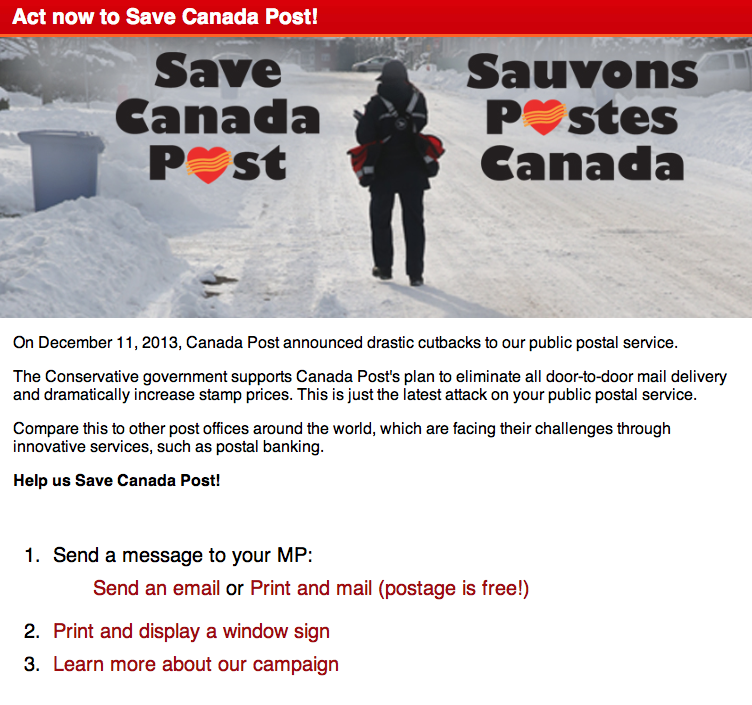 The opposition to planned postal service cuts across Canada has begun to mobilize, led by the union that represents postal workers across the nation.

This week CUPW took its message to Prince George, with a protest rally in the Central Interior city on Wednesday.

An event that attracted a range of participants, from unionized postal workers and other labour groups, to other concerned citizens and groups.

For the most part, it was a collective that doesn't share the Canada Post vision of the future of the super mailbox and other planned changes to the nature of our mail system.

The Prince George protest was just one of a number of rallies planned for across the nation, running as part of an information campaign launched by CUPW. The campaign is designed to send a message to the Conservative Government that Canadians have concerns over the future of their mail service and the sweeping changes planned by Canada Post.

Part of that information process can be found from this item found on the CUPW website, which offers up a bit of un-intended irony to the debate, with CUPW suggesting an email campaign on the topic. The explosion of email usage of course being one of the reasons of declining reliance on the mail by Canadians.

Though, Canada Post does also suggest a massive letter writing campaign by Canadians through the mail, with letters directed to Members of Parliament, correspondences which can be deposited in your local mail box free of postage.

CUPW also recommends that Canadians print out a window sign that calls on the Government to Save Canada Post.

Beyond those steps, CUPW would also like Canadians to learn more about their campaign to stop the planned cutbacks.

An umbrella group has been organized to make the case for expanded Postal service in the nation as opposed to the Canada Post plans, the main thrust of which would appear to be to set up a Postal Banking system across Canada.

They make their case and provide some alternative solutions to the Canada Post business plan from their website called publicpostoffice.ca

You can review the wide range of changes planned by Canada Post from our item on the theme of December.

As part of the cross-Canada protests planned by CUPW, a demonstration is planned for January 26th on Parliament Hill, designed to coincide with the return to work of MP's in Ottawa.

No details of any local protest in Prince Rupert have been announced as of yet.
Posted by . at 8:28 AM