While Prince Rupert has fared fairly well in the teeth of the Pacific frontal system that has come ashore on Tuesday, other parts of the Northwest have had their struggles today as the wind takes out power lines in a number of communities of the region.

As we outlined earlier on the blog, a large portion of Lax Kw'alaams was without power for three hours today as the wind brought trees down on power lines to the community,  a theme that would be repeated into the afternoon as the storm began its eastward shift.

By 2:30 Tuesday, wind related power outages had been reported on Haida Gwaii, in Terrace, Smithers, and Burns Lake. Bella Coola on the Central Coast also had power interruptions through the day as the storm came ashore.

Tuesday morning Environment Canada extended their Wind and Rainfall warning for the North Coast and Inland regions, advising that the winds will ease this evening as the system shifts southward and weakens.

The windstorm has also resulted in the closure of Highway 16 west of Smithers due to a power line coming down on the highway and accumulated debris in the area, the next update on that situation was to come at 3 PM. Further updates on the road conditions in the Northwest can be found on the Drive BC website or twitter feed 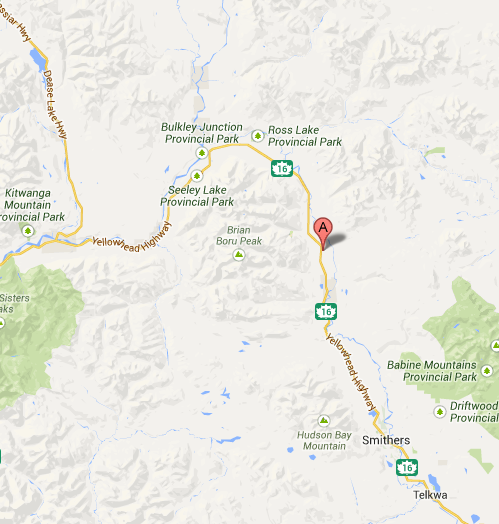 While many of the outages reported have been addressed, there are still pockets of the Northwest where BC Hydro is still working on the supply situation.

Those who have power to their locations, can track the latest outages, the anticipated time of restoration and those outages that have been restored from the BC Hydro website
Posted by . at 2:39 PM