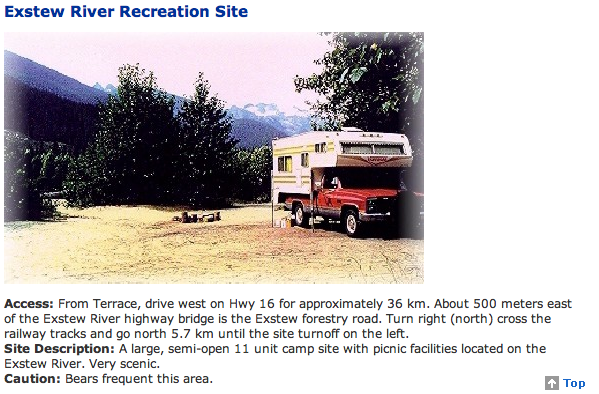 Posted Notices along Highway 16 that access to the popular Exstew recreation area may soon be eliminated, has resulted in a fair amount of discussion on the nature of the shrinking amount of  access to recreation options in the Northwest.

The prospect of losing access to the popular Exstew recreation site, which is located some 36 kilometres west of Terrace, has particularly struck a chord with many, both in Terrace and Prince Rupert.

Exstew is famous not only with Northwest residents, but is a location that has been promoted a fair amount by the Province as well. Listed in many tourism pamphlets and online articles, as a must see stop along Highway 16, with the waterfall of the region a particular feature of the area.

The controversy flared up in recent days, owing to a notice which has appeared on a CN rail crossing advising that the crossing will no longer be maintained by CN and will be closed off as of April 1st, 2014.

As the questions as to what's going on apparently began to come in, Jennifer Rice the MLA for the North Coast outlined some background the topic on Wednesday.

The North Coast MLA posted an update on the situation to her facebook page, providing some background on the change in access issue and the steps that she and Robin Austin, the MLA for Skeena were taking to address the issue.

Advising her constituents that with the Ministry of Forests facing budget restraints, the Ministry which is responsible for the recreation site itself, has no plans of taking on the maintenance provisions of the road or rail crossing at this time.

A situation which for now it seems will shift the onus for providing for the road access to the recreation site to the Northwest Forestry Company, Coast Tsimshian Resources LP .

They are responsible for the logging roads in the area, and it's to them, that the province will now seek out further information on the topic of  maintenance for the road and rail crossing area.

In her Facebook notice, the MLA advises that the Ministry of Forests is currently attempting to make contact with Coast Tismshian Resources so as to determine their intentions for the road and crossing maintenance issue.

Should the resource company decide to de-activate the road, Ms. Rice advises that both she and Mr. Austin the MLA for Skeena would pursue the issue further with the Ministry of Forests.

The MLA outlines that one solution may be to make the case for the Ministry of Forests to allocate funding towards taking over the CN crossing permit and road maintenance liability, as a benefit for the public.

With the spring and summer weather soon to arrive, Northwest residents will be hoping to see a resolution to the problem sooner rather than later.

Looking to have access to one of the more popular of recreation areas maintained for those that live in the region.