As North Coast MLA Jennifer Rice prepares for Monday's  resumption of the BC Legislature in Victoria, she has provided a list of her summer observations, delivered to North Coast homes with this weeks mail delivery.

The household mailer reviews some of the MLA's activities since the Legislature brought the spring session to an end back in May.

Included in her household essay of what she did through the summer, Ms. Rice reviews her time on the picket lines with the BCTF, offering up some of her thoughts on the current state of education in the province.

She also displays a number of photos of her summer travels, ranging from the community BBQ in Prince Rupert, to a canoe journey to Bella Bella and participation in a "chain of hope" across Douglas Channel in opposition to the Enbridge pipeline.

As to some of the issues that she intends to track during this fall session of the Legislature, Ms. Rice has thoughts on items related to LNG development, rural health concerns and the ongoing work on the BC Ferries file.

On LNG, Ms. Rice makes note on the speculative nature of the industry in the region at the moment and the impact that it is having on housing issues. Particularly in the areas of rental housing and social housing requirements. She also mentions the impact that development will have on Prince Rupert's infrastructure needs.

The NDP MLA also expresses her concerns over the effect that LNG development could have on the marine resources on the North Coast and introduces her thoughts on the impact of the practice of fracking at the source of natural gas deposits.

Her focus of her work on LNG issues while in Victoria will apparently be that of holding the government accountable to protecting land, air and water resources and to ensure that the LNG industry provides the best deal for the North Coast.

When it comes to Rural and Northern health concerns, Ms. Rice provides a short review of the current problems facing the health care system from ambulance services, to doctor and specialist shortages across the region.

Suggesting that a possible solution could be through a program called Paramedicince which employs more nurse practitioners in areas where there are shortages.

The controversial changes to BC Ferries and service options for the North Coast and Haida Gwaii also make up a good portion of her home delivery address, with Ms. Rice returning to some of her common themes on the nature of impacts of those changes on the coastal communities of the riding.

As part of her review of the BC Ferries issues of the North Coast, she recounts some of the feedback she received at the recent town hall session that she hosted in Prince Rupert and how she plans to bring those concerns to the Legislature starting next week.

Those are all some fairly high profile issues that the she has identified for her readers, each one of particular interest to the North Coast, so the nature and extent of her engagement on them will be something that local residents will be watching with interest.

As we've recounted through our Legislature archive page, in previous sessions since her arrival at the Legislature in Victoria, Ms. Rice has appeared to have had a lower profile on those issues and many others, than many of her NDP colleagues.

If her household mailer is an indication, perhaps she may be about to raise her profile in Victoria, seeking to keep the issues of the North Coast high on the Agenda of developments in the Provincial Legislature this fall.

For those that may have missed the correspondence in their mail box, you can find Ms. Rice's conversation points below. 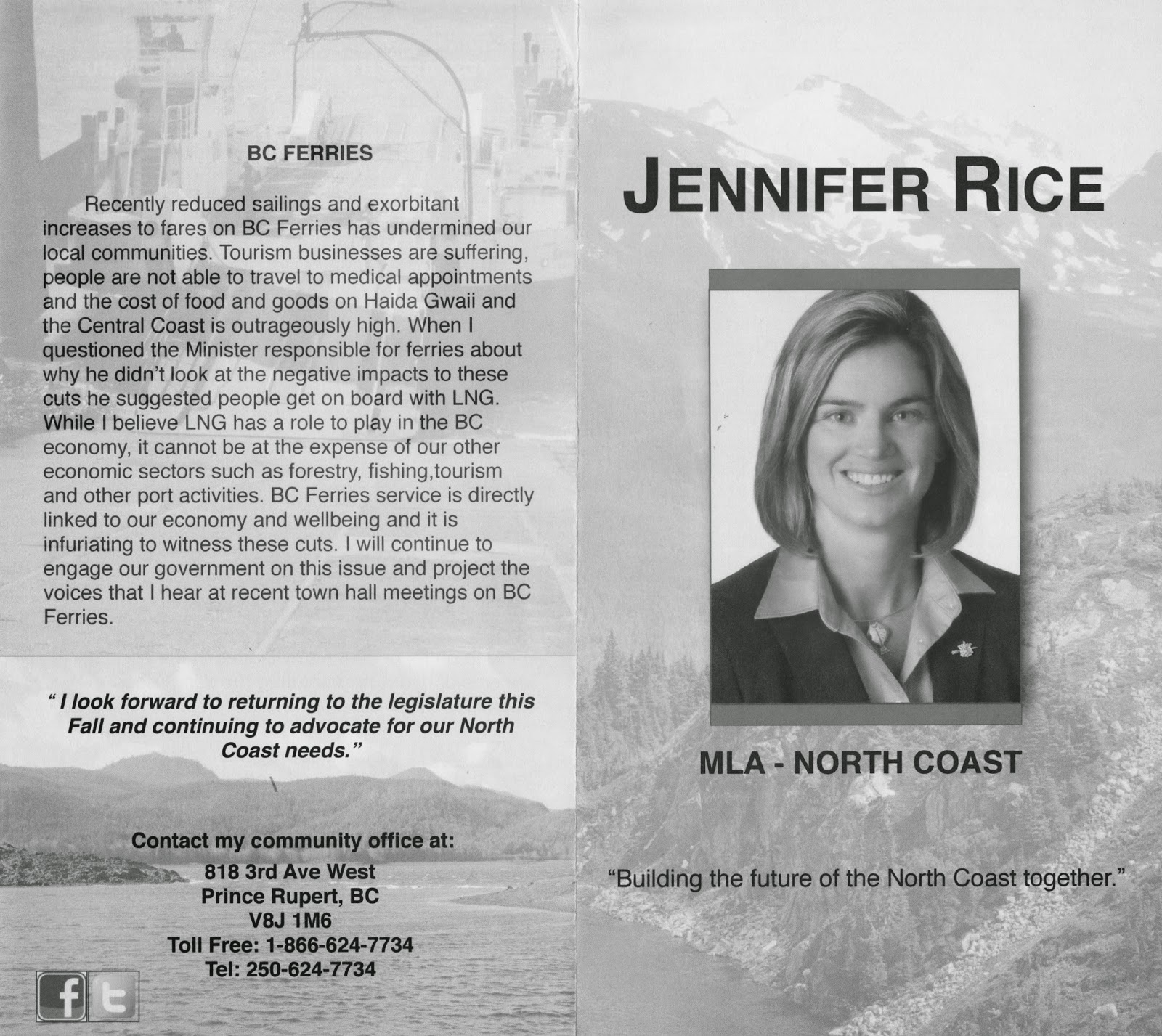 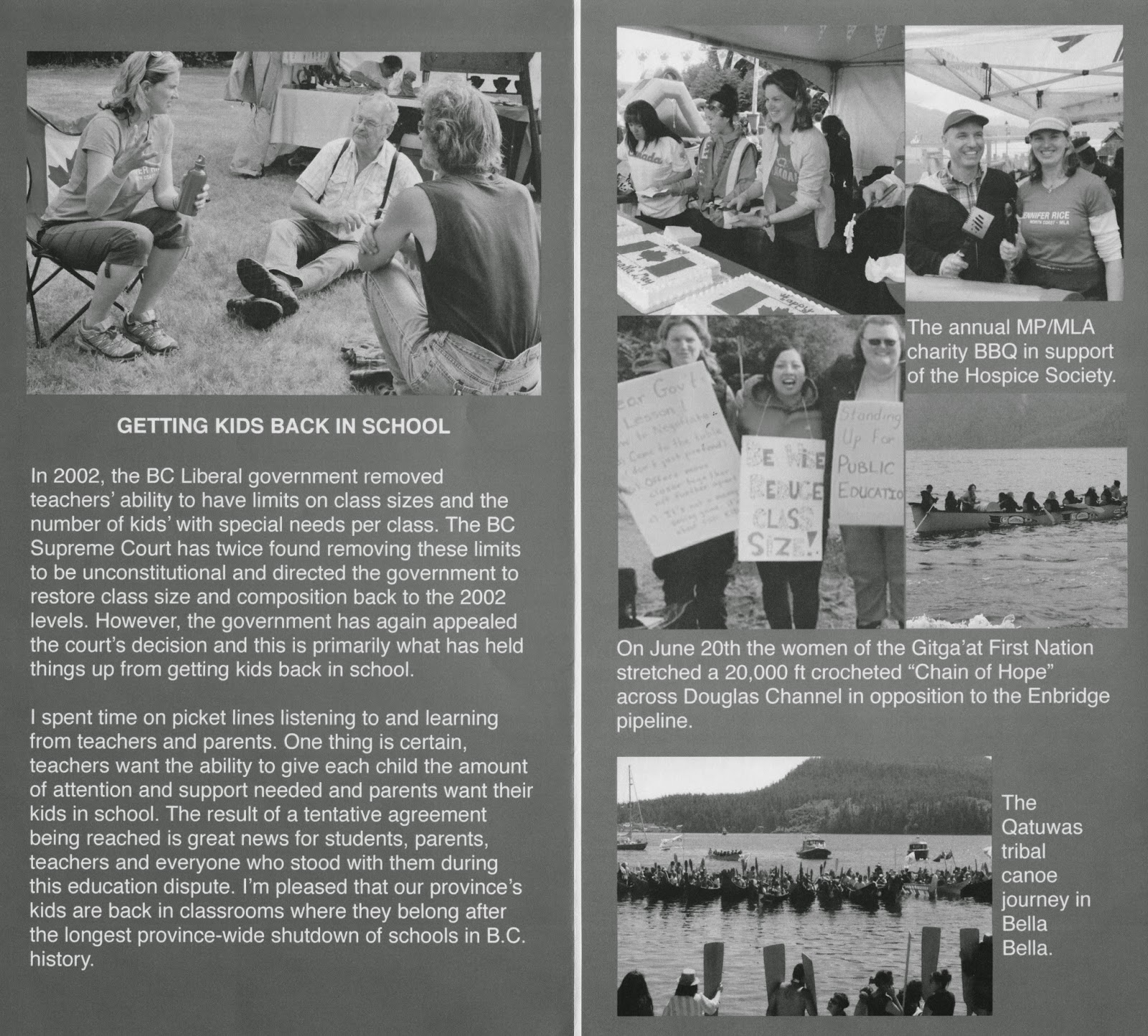 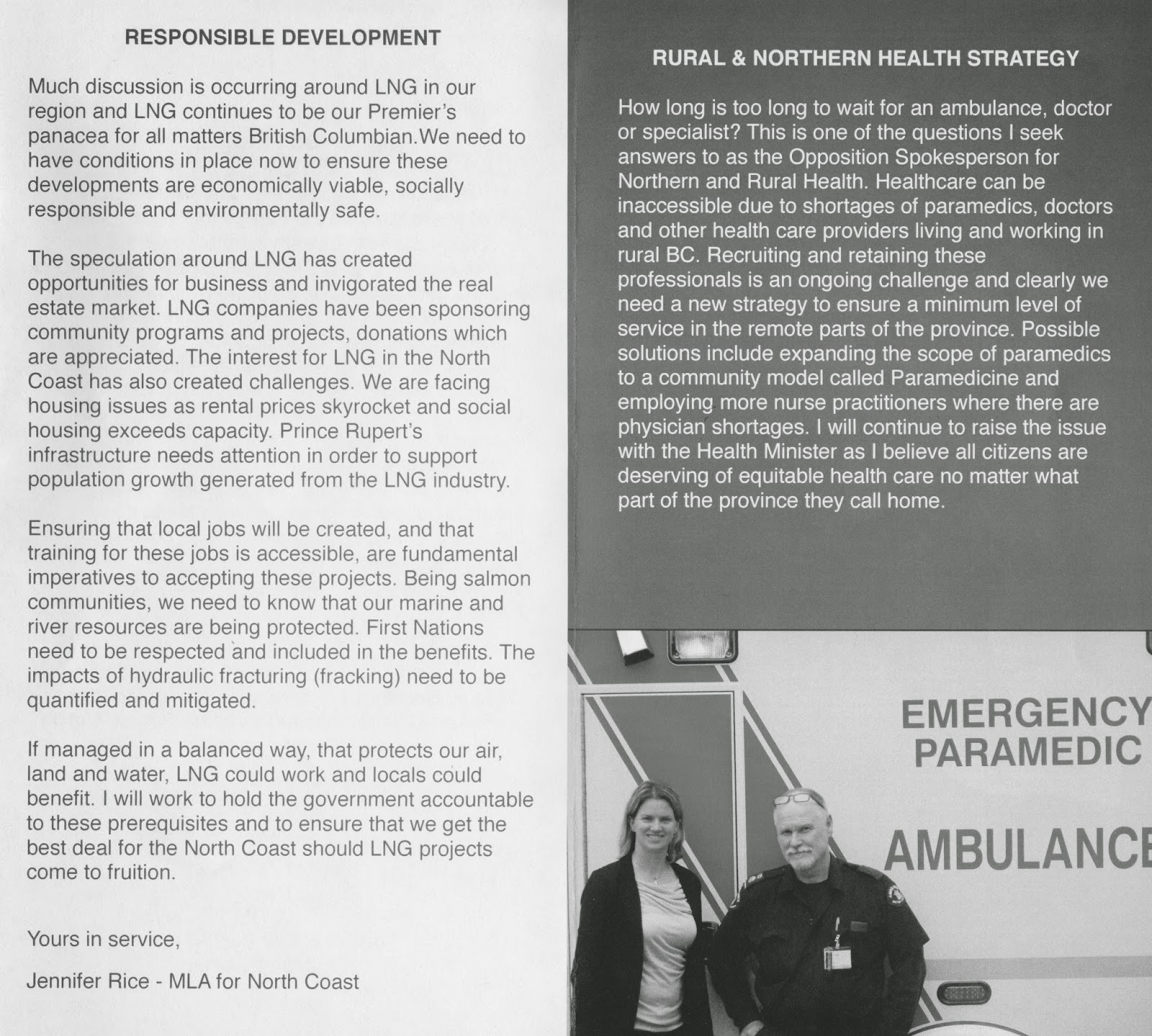 Email ThisBlogThis!Share to TwitterShare to FacebookShare to Pinterest
Labels: MLA Rice delivers household mailer prior to resumption of Legislature, October 2014