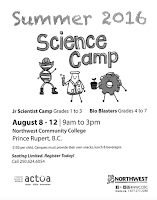 For parents looking for some interesting summer opportunities for their children while on the summer break from school, taking advantage of an upcoming science camp hosted by NWCC's Prince Rupert campus might just fit the bill.

The 2016 Science Camp takes place from August 8-12 in Prince Rupert and will run from 9AM to 3 PM at the Fifth Street campus in the downtown area.

The NWCC Science camp program features two options for parents and youngsters for this summer.

Cost for the week long science adventure is 150 dollars per child, campers must provide their own snacks, lunches and beverages.

NWCC has partnered with the national charity ACTUA to provide the hands-on Science camps across Northwestern BC this summer, besides the August camp in Prince Rupert, the NWCC camps will be held in the following communities.

Spaces are limited for those looking to attend, so early registration is recommended, you can find out more by calling Anne Rowse at NWCC at 250-624-6054

You can find out more about the summer camp program here

More items of interest on education in the Northwest can be found on our archive page.