The classrooms of Northwest Community College had a few more students in place compared to recent years on Tuesday, as the Terrace based post secondary education institution released some background for the first day of class for 2016-17.

In a media release issued by NWCC on Tuesday, College administrators noted that they expect this years number to provide the highest level of student registration since 2011, with the numbers so far this year showing that all areas of the College are either equal to last year, or showing significant gains.

From their number crunching, NWCC has determined that there are 12 percent more students on campus across the NWCC system, with many of those students registering in more courses than they have in the past.

Among some of the key increases found from NWCC offerings this fall are areas such as Business, Nursing, Social Work , University Credit and the Applied Coastal Ecology program.

Other programs that have seen growth included short term or Continuing education options which have seen an increase from 66 to 331 registrants as of yesterday.

The College and Career preparation program registration is also on the upswing, indicating some success towards streaming more students towards further education after their high school years.

NWCC has also launched an ambitious trades program in recent years, and with those students taking their courses at different times through the year, the numbers are harder to breakdown at the start of the September school year.

However NWCC estimates that the Trades Program has seen an increase as well, with 246 students registered to this point, compared to 239 last year.

Northwest Community College President and CEO Ken Burt highlighted the renewed focus that administration and staff have put in motion to make the increased numbers possible.

“Everyone at the College has worked extremely hard during this past year to help make this turnaround possible,”  ... “This is a big step for our College and with continued hard work, I am confident we will continue to grow to meet the needs of more students.”

The full overview of Tuesday's announcement can be reviewed here.

NWCC has not yet provided a complete breakdown by campus to provide further background on which campus locations have seen the largest of the increase in registration for the year ahead.

Residents of the North Coast will be looking forward to the larger overview, hopeful that an increase in attendance at the Prince Rupert campus may translate into even more program options for the Prince Rupert region.

The Prince Rupert campus is hosting Orientation sessions for students through the week from  9 AM to 1 PM each day, taking place in the North Building of the Fifth Street campus.

From those sessions students can learn more about Financial Aid and Awards, Locker Registration, Classroom and course selection and other services available. 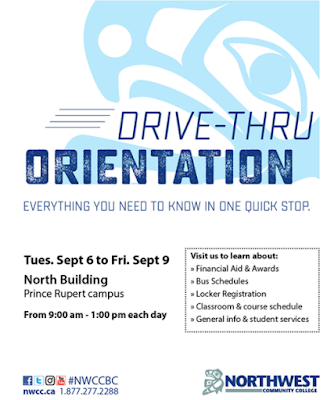 In addition to the main campus in Terrace and the Prince Rupert campus on Fifth Street, NWCC operates programs in a number of locations in the Northwest, with campus offices listed for Smithers, Kitimat, Haida Gwaii, Hazelton and Houston.

More background on Post secondary education in the Northwest can be found on our archive page.
Posted by . at 11:16 AM