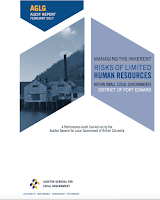 The District of Port Edward had a bit of extra attention last summer, as the North coast community was selected to be the subject of the ongoing Local Government audit program from the Auditor General for Local Government.

The program has been reviewing operations in a number of British Columbia communities over the last few years, covering a range of material and concepts to help those communities develop a new approach to the day to day delivery of services to the public.

The trip to Port Edward from the summer of 2016 marks the first time that the AGLG has put a focus on government operations in the Northwest.

Coming in at a total of 31 pages the AGLG review examines an expansive list of topics and includes a comprehensive profile of Port Edward.

The document includes a look at such areas as Human Resources and delivery of service to the community and features a financial snapshot, as well as an examination of the challenges that may be ahead for the community as potential industrial and economic growth arrives on its doorstep.

Gordon Ruth, the Auditor General for Local Government offered up a few introductory notes for Port Edward officials as part of the review, noting that the work of his office is not that of a financial audit; but rather one that assesses performance and management of human resources within the District.

While offering up a bit of background on how the AGLG office delivers its review he also observed that Port Edward was the smallest of the five municipalities that were audited for 2016, the others that were reviewed this year included the Districts of Squamish and Tofino, as well as the Cities of Ferni and Nelson.

In an information release related to the publication of the report, Mr. Ruth offered up a few thumbnail observations on the findings of the report.

“While Port Edward’s human resources planning and management practices are informal and the District has no staff entirely dedicated to managing human resources, this approach can be appropriate and effective in a very small local government”  ... “We did, however, find some areas where the District could benefit from greater formalization and structure to minimize human resources risks.”

“This report is a good example of how our office customizes its audits to fit the size and complexity of a particular local government. By doing so, we are endeavouring to provide suggestions that are suited to the realities of the auditee, in this case a small local government like Port Edward. This approach acknowledges the great diversity of local governments across the province.” From their review the AGLG team reviewed a number of areas of interest from the District.

An accompanying background sheet outlined what areas that the AGLG officials were interested in and some of the general findings that made up their review.

Among some of the key observations from the AGLG process were:

Port Edward is a very small local government with experienced staff serving a population that has been declining in recent years, but that may see significant future growth and development if the proposed Pacific Northwest LNG project goes forward.

The District’s human resource planning and management practices are largely informal and, because of its small size, Port Edward does not have any staff entirely dedicated to dealing with human resources.

In Port Edward this approach is largely effective and the District has comprehensive human resources policies and procedures and regular reporting to Council on staffing changes and their impacts on District operations.

The District would benefit from improved documentation of payroll procedures, cross- training of staff and the identification of and reporting on human resources measures.

Port Edward should consider opportunities for shared service arrangements with nearby municipalities, such as planning and development services and building inspections. This could help address capacity challenges and make sure services are delivered cost- effectively.

The main thrust of the AGLG work involved a look at many of the elements of civic government as delivered by the District of Port Edward with a focus on such areas as Qualified Staff, Accountability, Compensation and Payroll, Workplace relations and ethics, Health and Safety and Human Resources Reporting.

From those areas, the AGLG provided for thirteen key recommendations for Port Edward Council to review and put into action, a comprehensive explanation of each of the elements of those recommendations is included in the report from pages 15 to 26.

The thumbnail chart below provides a quick glance at what those findings offer: (click to enlarge). 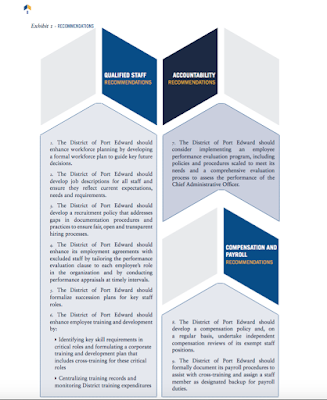 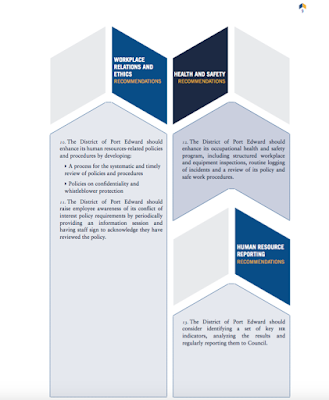 As part of the overall review process, the follow up comments from the District of Port Edward were included in the documentation, with Mayor Dave McDonald observing that the timing of the AGLG review could not be better.

Mayor MacDonald noted that the District is looking ahead to the potential of large industrial growth for the region and the impact that it will bring to the community.

The Mayor further noted that the report offers up the opportunity for the District to "fine tune" their HR policies and procedures, before that rapid growth arrives.

Mayor MacDonald's contribution can be reviewed below: (click to enlarge) 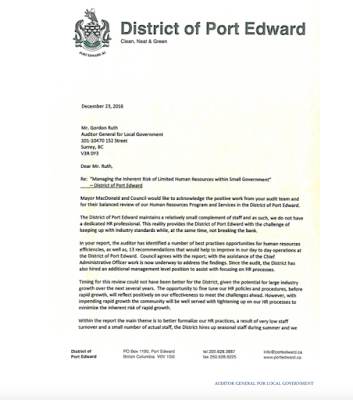 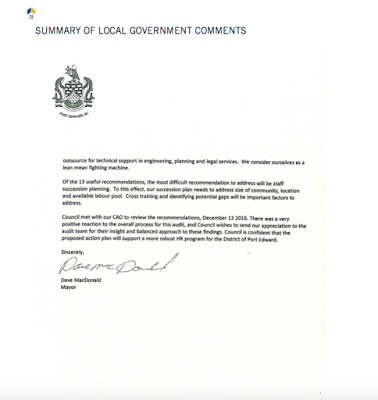 More background on the work of the AGLG office can be found from their website.

There is no indication from the AGLG information portal if the City of Prince Rupert is in line for its own review at some point in the future.

Though if the Port Edward experience is an indication, Prince Rupert officials might want to see if the community can get on moved onto a short list for future study, before the frequently discussed major growth prospects begin to put down some roots on the North Coast.

The AGLG process appears to be something that would offer up the opportunity for some eyes outside of the civic administration to provide a look at how government service is delivered in the community and outline what areas that may need some attention.

You can find more items of interest related to the District of Port Edward from our archive page here.
Posted by . at 12:03 PM