North Coast MLA Jennifer Rice has provided a glimpse for her Facebook followers as to the course of her work during her first two weeks in service as the Parliamentary Secretary for Emergency Preparedness.

The majority of her efforts so far in her new portfolio have taken her into the Cariboo region, where along with Premier John Horgan, she met with front line firefighters, Emergency Preparedness officials, Federal Ministers and Prime Minister Justin Trudeau. 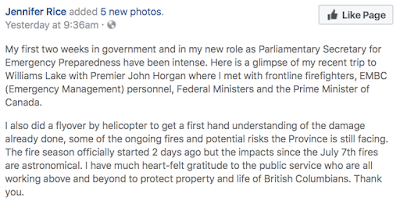 As part of her tour of the fire zone she took a fly over to assess and understand some of the damage that has taken place up and down the Highway 97 corridor.

Her photo stream from her recent tour included a shout out to the Skeena Division of the provincial forest fighting team currently working the fire lines in the Williams Lake area.


As Ms. Rice notes in her post, the Fire season really only officially started on August 2nd.

However, as the news reports out of the fire zones indicate, with July's fires claiming much territory in the Cariboo, BC is looking at perhaps one of the most damaging of fire seasons in its history.

The remainder of her photo array can be reviewed on her Facebook page.

With the Cariboo Fires still burning throughout the corridor, the province today extended the Provincial State of Emergency until August 18th.

The statement announcing the extension also highlighted the current status of both the Wildfires and the response to them in British Columbia.

The Province put a province wide Fire Ban in place in early July, with the Northwest included in the Open Fire Ban as of July 10th.

That ban remains in effect for all regions under provincial jurisdiction, however, both Prince Rupert and Port Edward have revised that ban to allow for small fires with their respective boundaries, a revision that remains in place to this point.

Terrace also had lifted the ban, but in response to provincial efforts in the wildfire zones, they put their open fire ban back in place earlier this week.

For some background notes related to the wildfire efforts currently underway in the Cariboo see our archive page here.

Further items related to Ms. Rice's work in Victoria can be found on our Legislature archive page.
Posted by . at 2:17 PM