Finance Minister to tweak the budget at sessions opening; in anticipation of the full budget of February


As MLA's settle in for the work ahead of the Fall session, they will receive a financial update from Carole James, with the Finance Minister and Deputy Premier providing the fall snap shot of financial planning for the NDP government.

Few major announcements are anticipated for when Ms. James rises in the Legislature today, the update more of a holding document while she and the cabinet explore the areas where they will redirect the province's finances when she delivers the first full budget for Horgan government next February.

That more expansive document will be constructed after consultation with the cabinet and will put a wider focus on how the NDP will make use of the provincial treasury as they move deeper into their current mandate.

For today the emphasis will reportedly be on the NDP government's education plans, as well as how they will approach some areas of affordable housing, mostly when it comes towards prospects for a potential renter's rebate.

Those were some of the themes of Friday's Speech from the throne and mark a bit of the template for what Ms. James will deliver today. 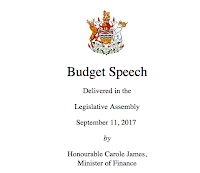 Expect a refrain on the NDP talking points of affordability and fairness to be the guiding elements for the financial notes, as well as an update on how much the cost of the summer long battle during the forest fire season impacted on the provincial treasury so far.

The Finance Minister introduces her financial plan to the Legislature as part of the afternoon session, which starts at 1:30.

Some of the media previews related to the budget update can be examined below:

You can view the presentation from the Live Feed for the Legislature here.

Once she has delivered her financial update, the Finance Minister will also put out the call for citizen engagement across BC, with the Finance Committee set to embark on its annual consultation process on budget preparation for February.

Ms James may outline how that process will work as part of her financial update for today.

British Columbians can learn more about how then can register for updates related to that budget process through the Legislature Consultation page.

The Monday session will also offer up the first indications as to what the atmosphere inside the Legislature might be like, as the MLA's move into this fall session of the provincial parliament.

Friday proved to be a day that ended with a bit of acrimony from the Liberal side of the House, with word that Liberal MLA Darryl Plecas had accepted the position of Speaker of the House.

As the new work week begins in Victoria, the Liberals it would seem are still somewhat angered at his decision.

For a review of some of the items of interest for the Northwest see our archive page here.

A larger overview of the British Columbia political scene is available from our political portal D'Arcy McGee.

Update: Some early background on the BC Government's update can be found here and here

The text of the full address to the Legislature is available here.
Posted by . at 9:20 AM

Email ThisBlogThis!Share to TwitterShare to FacebookShare to Pinterest
Labels: BC Budget update set for this afternoon