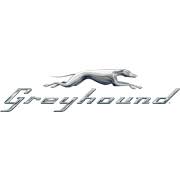 The fall out continues to roll in from Northwest politicians in response to Greyhound Canada's announcement of its application to abandon the Prince Rupert to Prince George run and four other routes in British Columbia.

As we outlined on Wednesday, the inter-city transportation provider has indicated that the declining passenger levels on the five runs in question are providing too large a financial burden on their finances, with Greyhound pointing to alternative options across Northern BC as one contributing factor to their woes.

Late Thursday afternoon, North Coast MLA Jennifer Rice delivered her first comments on the prospect of the end of Greyhound's service, offering up a Facebook post that outlined her disappointment and interest in how the Passenger Transportation Board will address the request. 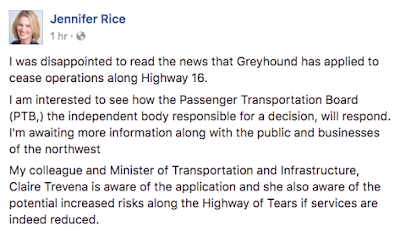 One of the factors for Greyhound in moving forward with their application has been the introduction of community to community local transit along Highway 16, an initiative that Ms. Rice was long an advocate for, even though the service does not as of now, include the North Coast as part of the Northwest system.

At the time of the introduction of that service to Northern BC, the North Coast was the only region that did not sign on to the province's transportation plan.

In December of last year, Prince Rupert Mayor Lee Brain outlined how the communities in this region had decided to direct their attentions to services provided by the local social services agency Transition Society.

The northwest shuttle service was launched last year by the Liberal government, which found a quick response from the majority of the communities that dot the map from Terrace to Prince George, with the community to community service now in place along much of Highway 16.

In April, the Regional District of Kitimat-Stikine joined the growing list of those communities across the Northwest to offer the shuttle bus service, introducing three day a week service that links the Hazeltons, Kispiox and other communities with the larger service centre of Terrace at a cost of five dollars per segment travelled.

As the expanded routes were rolling out earlier this year, the province was still holding the door open for Prince Rupert to join in on the Northern BC Highway 16 corridor plan.

The announcement this week of the Greyhound application has also caught the attention of the Mayor's of Terrace and Smithers.

Both Northwest politicians shared their comments with local media outlets in their respective communities, while Smithers Mayor Taylor Bacharach also took the issue to a larger province wide audience offering some thoughts on the issue for the CBC's BC Almanac program

For her part, Mayor Carol Leclerc of Terrace weighed in on the situation for CFTK TV last night, observing on the impact of the Greyhound decision and how the shuttle bus system that is in place is not really a viable alternative to the daily service provided by the bus line.

Greyhound has also pointed to the highway service offered by Northern Health as another area of concern for them, however representatives of Northern Health were quick to note that their Northern Connections bus service is exclusively for the use of patients attending medical appointments.

So far there has been no comment from Prince Rupert Mayor Lee Brain, or from any of the six Prince Rupert council members in response to the Greyhound application.

Nor have the members of City Council offered up any indication as to how the transportation program that the North Coast currently has in place through the Transition Society will work, should the daily Greyhound service to points east of the city come to an end.

More notes related to transportation along the Highway 16 corridor can be reviewed from our archive page here.
Posted by . at 10:06 AM

Email ThisBlogThis!Share to TwitterShare to FacebookShare to Pinterest
Labels: Greyhound application to cease service in Northern Bc