Up, Up and Away ... Gas Prices skyrocket on North Coast, across Canada


Travel on the Labour Day weekend just got a whole lot more expensive, as gas stations offer up a surprise for travellers this morning with a significant jump in the price per litre for the fuel for your weekend journey.

All four of Prince Rupert's gas stations have a posted price of 126.9 this morning, which marks an eighteen cent litre price jump from just a few days ago, when we last filled up the North Coast Review News cruiser.


The high prices for the North Coast appear to be the canary in the gas price coal mine today, according to the 8AM price listings through the GasBuddy website, Terrace is still listing prices ranging from 104.9 to 111.9 per litre, though situation would appear to be about to change, with one location boosting its price to 122.9. 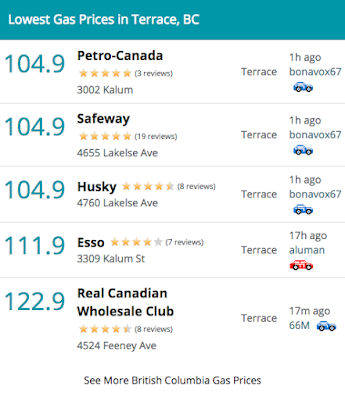 Further along Highway 16, Smithers is listed at 121.9 as of this morning, while moving east towards Prince George,  Burns Lake is listing prices of 119.9 per litre.

For those making the trek to Northern BC's largest city this Labour Day weekend, Prince George itself seems to still be hosting lower prices.

The current price point  in Prince George remains close to the one dollar a litre mark, with only pennies the difference among that city's fuel providers. 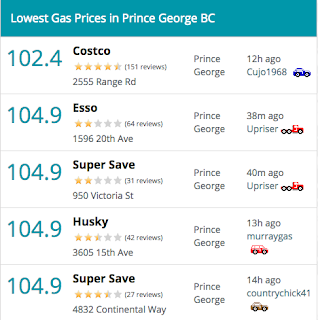 Gasoline prices are expected to spike through the month of September owing to supply issues out of Texas with a large portion of the American refineries located in the now flooded areas of the Houston area.

The impact of Hurricane Harvey has delivered video out of the US of long line ups of cars with drivers looking to fill up their tanks, with a number of those stations running out of gas as the supply tightens across that country.

According to oil industry observers,  the shutdown of the American production will mean extra stresses and strains on the Canadian refineries that service American markets, providing a spin off effect across Canada.

The price hike was not unexpected with warnings issued over the last few days, thought that's little consolation for those about to head out on the road for the final weekend of summer.

More notes related to travel along the Highway 16 corridor can be found here.