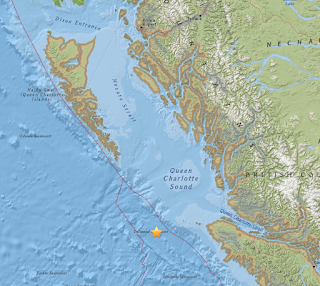 Another in a string of moderate temblors in Queen Charlotte Sound was recorded 174 kilometres NorthWest of Port Hardy, the 4.2 magnitude quake was noted at  7:51 this evening it was listed at 10 kilometres in depth.

It's one of a number of similar sized seismic shifts that have occurred in that area between the North tip of Vancouver Island and the southern end of Haida Gwaii through the year.

No reports of damage were recorded from today's event and No Tsunami risk was generated as a result of the underground shift under the sound.

For more notes related to seismic events see our archive page here.
Posted by . at 8:54 PM