A Sunday Night Super Moon ... and if we're lucky, we just might be able to sneak a peek!

A rather rare celestial event is on tap for this evening, with what some sky watchers are calling the only true Super moon of the year arriving at Moonrise this evening.

The bright orb in the sky where we've left some footprints and assorted space automobiles will be 222,443 miles away from earth or 257,987 kilometres for those now steeped in the metric system.

The image of the Moon looming large over the earth has provided for collections of photos and videos upon it's arrival, the twitter feeds, Facebook pages and Instagram posts tracking its travel across the many timezones of the world.

Known as a Perigee Moon, the visual image could appear up to 14 per cent larger  and 30 per cent brighter

Those that may have one to share on the North Coast can share it with all through twitter at the #PrinceRupert forum on the social media site.

Taking part in such events that are weather dependent is always a challenge for North Coast residents, years of lost eclipses, meteorite showers and such make for the list of frustration, though some aware of the impact of the Mountains of the coast line head inland for their chance whenever such events come along.

Tonight, you might just get lucky, the forecast for the early evening is for party cloudy skies for the North Coast, with hopes perhaps for a clearing break or two to view the Super Moon as it transits along its path.  The Midnight hour however will see the window of viewing close down tight, so best to get your viewing in from dinner time on. 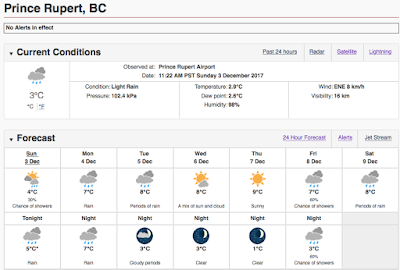 And should you miss it tonight, or the weather Gods intervene ahead of its arrival, you'll have two chances to take a second look in January with Super Moons set to arrive on January 2nd and the 31st of 2018.

The final moon of the trilogy is expected to be extra exciting, with a lunar eclipse arriving with that Super Moon event.

The January 31st version will double down on the celestial event, marked by a Blue Moon as well, making the end of January visual presentation from the Sky a Super Blue Moon ...

Some notes on what to watch for and how can be reviewed below:

Email ThisBlogThis!Share to TwitterShare to FacebookShare to Pinterest
Labels: Super Moon on view tonight 9f the clouds allow for the North Coast