They haven't spoken much about the issue in public council sessions for a few years now, but a couple of notes from this weeks release of the Five Year Financial plan, would seem to indicate that the City of Prince Rupert is still working towards replacement of the city's RCMP detachment building.

With a stop gap measure of jail cell renovations in the works to take the immediate pressure off, the City in response to the RCMP's notice of the need for a new detachment has at least put the concept of land purchase and construction on a chart of long term debt projections.

With the long term debt forecast found on page 38 of the document. 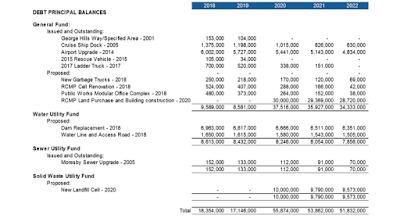 Among the notes on the long term debt planning the RCMP line items appear twice:

The current detachment jail cell renovations listed at $480,000 for this year.

With RCMP Land Purchase and Building construction flagged for 2020 with the debt requirement noted as 30 million dollars. A completed detachment building would be expected to be in service by 2023.

The progress on the RCMP issues would appear to have been made through the number of Closed Council sessions over the last year, with few public notes on the themes offered up along the way since the Jail cell renovation issues came up for discussion in June of 2017.

The topic did not get any kind of airing during a presentation from Inspector Blake Ward, the City's Detachment commander back in August of last year, an opportunity one might have thought that the City Council might have used to outline its plans for the Prince Rupert facility.

The City's CFO Corinne Bomben did provide an update in December when it comes to the Jail Cell renovation project, noting that as it moves forward it's cost would funded through short term debt.

One potential site for any new detachment could be adjacent to the Lester Centre, as we noted on the blog back in 2016, a road closure notice at that time followed on suggestions that the area might be suitable location for such a facility.

The timeline towards a proposed RCMP detachment from page nine of the budget document states:

The City has received notification that the existing RCMP building is no longer adequate to accommodate the policing service in accordance with their regulated standards/requirements. Site investigation is ongoing for placement of a new building with inclusion of the provincial force.

Consolidation of the municipal and provincial members is expected to translate into cost savings that will better enable the servicing of debt taken on to finance the replacement. A new facility is expected to be in service by 2023.

The City's Financial Document expands further on the RCMP building issue, with a portion of the notes focusing on the dispute related to the state of negotiations with Port Edward when it come to the Ridley Island Tax Agreement which is reviewed on page 11

Unfortunately, at no fault of the City, the renegotiation never occurred. The Province has now become involved and has appointed a facilitator to bring about an agreement between the two communities.

Based on the Districts financial statement data, the tax sharing agreement results in Prince Rupert paying approximately 50% of all Port Edward tax collected.

As mentioned earlier in this section, the City must build a new RCMP building. Preliminary estimates are that the annual debt cost to Prince Rupert is approximately $700,000 (net of estimated Provincial lease).

With the understanding the local RCMP detachment benefits Port Edward, Prince Rupert, and the outlying communities, Council and staff hope to divert the Ridley Island Tax Sharing agreement funds paid to the District of Port Edward entirely towards the cost of the new RCMP detachment. This would translate into no additional cost to City taxpayers, who currently bear the primary burden of regional service provision.

Despite what appears to be not only some interesting news on the issue, and perhaps a bit of controversy that may go with it, at the most recent City Council session, the theme of the RCMP building didn't make for the presentation phase of the document.

Nor did it feature in any discussion among the Mayor and those Council members in attendance on the night.

The public however, if they wish, can bring the topic up next Monday as part of the first of two Council Engagement sessions of March 12 and  26 set for the public.

A look back at what has been a long standing issue for the City can be found below:


Lost in the shuffle it seems, was the one time plan to also build a new facility for the city's Fire/Rescue department, a discussion topic that hasn't made for much traction since about 2013.

For Fire Chief Dave Mckenzie, here's a link that he may wish to forward to the City Council members, something to keep the profile of the fire department on their horizon as well.

We also keep an archive of the various Emergency Responders across the Northwest which you can review here.

To return to the most recent blog posting of the day, click here.
Posted by . at 11:39 AM