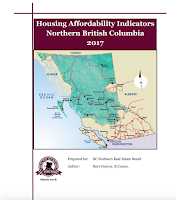 Those looking to purchase a home in Prince Rupert, will need to have at least 33 per cent of their household income in hand, in order to make the prospect of home ownership an affordable pursuit.

That is one of the key indicators from a report released by the Northern British Columbia Real Estate Board, which published their Affordability Indicators Report in March, making note of a variety of their findings from 2017.

The document explores a range of issues across the Northern Region and puts Prince Rupert in the same company as Prince George, 100 Mile House, Williams Lake and Terrace when it comes what would be homeowners face when it comes to affordability for housing.

Though as the report notes, compared to Vancouver, Victoria and other larger communities in the highly populated areas, real estate in the North and Northwest is still a relatively affordable prospect.

Among some of the elements that help determine the affordability for each community is median household income, and the requirement to service local taxes, user fees, utilities and mortgage payments.

When it comes to finding an affordable house in Northern British Columbia, your best bet is either Kitimat or Mackenzie, both communities have an affordability rating which only requires 20 percent of your household income to finance your housing needs.

You can review the full report from the BC Northern Real Estate Board here.


The issue of affordable housing on the North Coast has been an ongoing topic over the last five years or so, with prices reflecting the speculative nature of the one percolating LNG ambitions for this part of the Northwest.

And even as those proposed projects have dropped off the lists one after another, the price point for many houses continues to be quite high, spurred on by announcements of new potential projects for the region and continued growth at the Port of Prince Rupert.

Still, for many in this community, the quest for affordable housing remains elusive, especially for those that have limited resources to put towards housing.

And for those in the most need in the community, the situation is still one of extreme concern, something that was made fairly evident when a a tent city established itself at the City Hall lawn in the fall of 2017.

At that time, a flurry of activity followed the arrival of the tents, the first move coming with a winter shelter put in place on Third West one block east of City Hall.

Along with the opening of the warming shelter, an announcement at the time from Prince Rupert City Council and MLA Jennifer Rice shared promising news of 44 modular homes that were destined for the community to help alleviate housing issues for those in the most need.

Though so far, as we move into mid April,  it should also be noted, that neither the members of  City council, or MLA Rice have provided for any form of update as to the status of those much discussed homes and when they may finally arrive and where exactly they will be set up.

More items related to housing issues in the Northwest can be reviewed on our archive page.

Email ThisBlogThis!Share to TwitterShare to FacebookShare to Pinterest
Labels: Affordability levels in Northern BC housing