The prospect of much less truck traffic through the downtown core is now a reality, with the Prince Rupert Port Authority announcing that the Fairview-Ridley Connector Corridor has officially been opened.
The news coming through an information release from the Port today, that notes of the official ceremony hosted this afternoon at the DP World Terminal location. 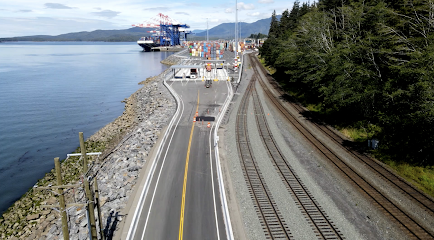 The Prince Rupert Port Authority’s (PRPA) Fairview-Ridley Connector Corridor formally opened today with an official ribbon cutting ceremony.
Testing on the route got underway in mid-August, with container truck traffic beginning to travel to the newly opened southern gate at DP World-Prince Rupert Fairview Container Terminal, and the Corridor is set to be fully operational on August 29, 2022.
The private haul road and two additional rail sidings now in place enable greater efficiency and competitive advantages at the Port of Prince Rupert, while improving public safety and supporting PRPA’s carbon reduction strategy.
Stretching around the southwestern edge of Kaien Island, the Connector Corridor shortens the distance trucks must travel from existing transloading sites in Prince Rupert and future facilities to Fairview Container Terminal.
By steering drivers away from urban areas and onto PRPA-owned roads, the Connector Corridor will help cut commercial vehicles emissions by up to 75 percent and reduce truck traffic congestion in the city of Prince Rupert.
Prince Rupert Port Authority President and CEO Shaun Stevenson spoke to the milestone achievement today as part of the Grand opening.
“The Fairview-Ridley Connector Corridor is a key example of the Prince Rupert Port Authority’s proactive approach to land use planning and is designed to maximize efficiency within the Port complex, simultaneously upholding our commitment to reduce the impacts of Gateway operations on the environment and surrounding community.
With the addition of this infrastructure, we can enable greater efficiencies and competitiveness at the Prince Rupert Gateway and generate new economic opportunities on local, regional, and national levels.”
The Port President and CEO also made note of the local stakeholder involvement in delivering the completion of the roadway.
"In addition to supporting trade and environmental targets, the Fairview-Ridley Connector Corridor has provided significant benefit to local and Indigenous workers, subcontractors, and other stakeholders, as well as enabled local and Indigenous skills training and employment in the surrounding community and Pacific Northwest region.
The construction was undertaken by the Coast Tsimshian Northern Contractors Alliance (CTNCA), a local First Nations joint venture led by Prince Rupert Lax Kw’alaams Band and Metlakatla First Nation. Contracts awarded to CTNCA for the project, as well as the related habitat compensation work in Seal Cove, totaled more than $135 million, the most significant in PRPA’s history.
Most of the construction was completed during the pandemic and at the project’s peak 118 people, working three rotating shifts, preserved to complete the extensive in-fill work."
The full review of today's announcement and a collection of photos from the Grand Opening can be viewed here.
A video provided by the PRPA of the route,  provides a glimpse of what the new connector looks like.

We may see a few trucks transiting through the Downtown core for the next little while, the corridor is anticipated to be fully operational by August  29th.
For more notes related to the Port see our archive page here.
Posted by . at 3:46 PM